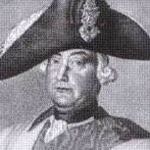 Karl George Lebrecht of Anhalt-Köthen (Köthen, 15 August 1730 – Semlin, 17 October 1789), was a German prince of the House of Ascania and ruler of the principality of Anhalt-Köthen.

He was the second (but eldest surviving) son of Augustus Louis, Prince of Anhalt-Köthen, by his second wife Christine Johanna Emilie, daughter of Erdmann II, Count of Promnitz-Pless.

As a young prince, Karl George Lebrecht served briefly in the Danish army (1750–51) and, from November 1751, in the Prussian army.

In 1755, he inherited Anhalt-Köthen after the death of his father.

Karl George Lebrecht was created a knight of the Order of the Black Eagle in 1780 and in 1787 was elevated to the rank of Generalfeldmarschall.

During the Turkish Wars of the 1780s he contracted a fever and died in Semlin (now Zemun) near Belgrade.

In Glücksburg on 26 July 1763 Karl George Lebrecht married Louise Charlotte (b. Glücksburg, 5 March 1749 - d. Köthen, 30 March 1812), daughter of Frederick (1701-1766), Duke of Schleswig-Holstein-Sonderburg-Glücksburg, and by birth a princess of Denmark as descendant in the male line of King Christian III. They had six children: