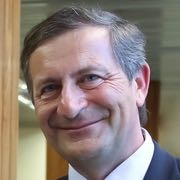 Karl Viktor Erjavec (born 21 June 1960) is a Slovenian lawyer and politician who served in the government of Slovenia as Minister of Foreign Affairs since 2012. He has been the president of the Democratic Party of Pensioners of Slovenia from 2005 to 2020. He was Minister of Defense from 2004 to 2008 and Minister of Environment and Spatial Planning from 2008 to 2010.

Erjavec was born in Aiseau, Belgium, into a family of Slovene immigrants. He moved to Slovenia in 1972, then SFR Yugoslavia, when the family returned home. He graduated from the Faculty of Law at the University of Ljubljana in 1985 under the supervision of the renowned legal expert Rajko Pirnat. He entered public service after democratisation in 1990, when the new democratic municipal authorities of the town of Kranj named him as head of the local administration. In 1993, he joined the Slovene Christian Democrats. Between 1995 and 2000, he worked as the secretary of the Slovenian ombudsman Ivo Bizjak, his party colleague. In 2000, when Bizjak was named as Minister of Justice in the centre-left government of Janez Drnovšek, Erjavec became the secretary at the ministry. During this period, he rose to prominence because of his decisive actions against corruption in the justice system.

In 2000, the Slovene Christian Democrats merged with the Slovenian People's Party, and Erjavec was a member of the latter until 2004. When the Slovene People's Party left Anton Rop's government prior to the 2004 parliamentary election, Erjavec quit the party and joined the Liberal Democracy of Slovenia, then the largest coalition government.

Just before the parliamentary election of 2004, Erjavec joined the Democratic Party of Pensioners of Slovenia. The same year, he was elected to the Slovenian National Assembly. When his party joined the centre right government coalition of Janez Janša, Erjavec became Minister of Defence. In 2005, he was elected president of the Democratic Party of Pensioners. After the parliamentary election of 2008, the party entered the left wing government coalition of Borut Pahor, and Erjavec was named Minister of the Environment and Spatial Planning.

On 26 January 2010, Erjavec announced his resignation in the National Assembly, and on 27 January 2010, he officially resigned in a letter to the Prime Minister. That happened after several months of political pressures that centered primarily on the demand of the Court of Audit of the Republic of Slovenia for the dismissal of Erjavec as he failed to secure an efficient waste management system. His resignation became valid on 2 February 2010, after the Prime Minister informed the National Assembly about it. On 12 February 2010, Erjavec was succeeded by Roko Žarnić. In January 2011, Žarnić stated that his predecessor had too little time to settle the issue of waste.

In December 2011, he was elected to the National Assembly as a deputy. In February 2012, he was appointed Minister of Foreign Affairs in the center-right coalition government of Janez Janša.

The contents of this page are sourced from Wikipedia article on 08 Mar 2020. The contents are available under the CC BY-SA 4.0 license.
View Karl Erjavec 's image gallery
Image Gallery