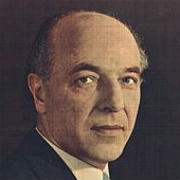 Karl Arnold (21 March 1901 – 29 June 1958) was a German politician. He was Minister President of North Rhine-Westphalia from 1947 to 1956. From 7 September 1949 until 8 September 1950 he was President of the German Bundesrat. He is, together with Jens Böhrnsen (in 2010) and Horst Seehofer (in 2012), one of the three Presidents of the Bundesrat who have acted as head of state during a vacancy of the office of President, according to Article 57 of the Basic Law.

Arnold was born in Herrlishöfen in Württemberg on 21 March 1901. He was trained as shoemaker and later (1920/21) studied at the Soziale Hochschule Leohaus, Munich.

In 1933, Arnold was co-owner of a sanitary installation shop in Düsseldorf. The Gestapo observed and hunted him in the following years because of his political activities. In 1944, he was jailed by the Gestapo.

After World War II, Arnold became politically active again. In 1945, he was co-founder of the local Christian-Democratic Party in Düsseldorf, which became part of the CDU later in 1945. Also in 1945, the Düsseldorf chapter of the united workers union was founded, presided by Arnold. On 29 January 1946 Arnold was named mayor of Düsseldorf and later elected in the first free elections (26 October 1946).

In December, 1946, Arnold became deputy minister president of the state of North Rhine-Westphalia and in 1947 he was elected minister president. Until 1950 he presided over a coalition of CDU, Centre Party, SPD and (shortly) the Communist Party. He considered himself a "christian socialist". The only in-parliament-party he did not let enter the government was the FDP, whose North-Rhine Westphalian branch had a particular nationalist bent.

On 7 September 1949, he was elected as the first president of the federal Bundesrat of Germany.

From 1950 to 1956, Arnold was elected minister president for North Rhine-Westphalia twice again, governing with the help of conservative parties and the Free Democrats. Important acts of his government were the foundation of the North Rhine-Westphalian broadcasting system (today: Westdeutscher Rundfunk) and the German system of workers union influence in steel and coal industries.

On 20 February 1956, the FDP switched coalition affiliation to the SPD, ending the Arnold government in North Rhine-Westphalia.

In 1957, he was elected into the German Bundestag (with a 72% majority in his constituency). He was member of the Bundestag until 29 June 1958, when he died of a heart attack.

Arnold was a Roman Catholic and a member of the German branch of the lay Catholic organization Catholic Action.