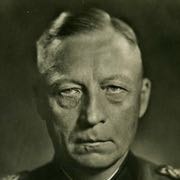 Karl Allmendinger (3 February 1891 – 2 October 1965) was a general in the Wehrmacht of Nazi Germany during World War II. He commanded the 5th Infantry Division, V Army Corps then 17th Army on the Eastern Front. He was a recipient of the Knight's Cross of the Iron Cross with Oak Leaves.

Allmendinger was appointed to command the 5th Infantry Division as a Generalmajor on 25 October 1940. His division was committed to the invasion of the Soviet Union in June 1941, and he was awarded the Knight's Cross of the Iron Cross on 17 July. He was promoted to Generalleutnant on 1 August 1942, and was awarded the Oak Leaves to his Knight's Cross on 13 December 1942. He was relieved of command of the division on 4 January 1943. In the Army's reserve since 1944, he was arrested by U.S. forces in 1945 but released in 1946.

The contents of this page are sourced from Wikipedia article on 08 Mar 2020. The contents are available under the CC BY-SA 4.0 license.
View Karl Allmendinger 's image gallery
Image Gallery