Donev studied acting at NATFIZ, graduating in 1993. Between 1994 and 2009, he was an actor in the Bulgarian Army Theatre (Bulgarian: Театър „Българска армия“). In 2000 and 2001, Donev was part of the cast of the TV show "The Street" (Bulgarian: Улицата), which was directed by Tedy Moskov. He is well-known for his comic sketches.

The contents of this page are sourced from Wikipedia article on 24 Jun 2020. The contents are available under the CC BY-SA 4.0 license.
View Kamen Donev 's image gallery
Image Gallery 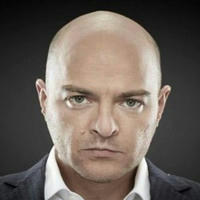