He was also an athlete and administrator who was President of Asian Football Confederation from 1 August 1976 until his resignation on 9 December 1978. He was also President of Football Federation of Iran from 17 October 1972 to 17 February 1979.

The contents of this page are sourced from Wikipedia article on 13 May 2020. The contents are available under the CC BY-SA 4.0 license.
View Kambiz Atabay 's image gallery
Image Gallery 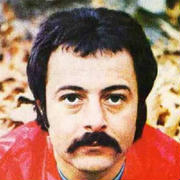