He has more than 6000 lectures and 137 books in various Islamic sciences.

Kamal al-Haydari was born in the city of Karbala in Iraq in 1376 AH (Hijri year), corresponding to 1956. His father was a cloth dealer. He completed his elementary, middle and high school education in public schools. He then moved to Najaf in 1974 and completed his academic study at the Faculty of Fiqh. He garnered a bachelor's degree in Islamic sciences with honors in 1978 and then migrated to Kuwait in 1980 due to the prosecution of authorities, and then to Damascus, Syria, where he remained for nearly four months. He then left for Iran via Turkey and settled in the city of Qom.

The contents of this page are sourced from Wikipedia article on 24 Jun 2020. The contents are available under the CC BY-SA 4.0 license.
View Kamal al-Haydari 's image gallery
Image Gallery 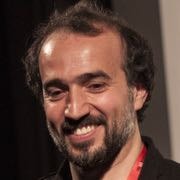 Minister of Roads and Urban Development