Julie Doucet (born December 31, 1965) is a Canadian underground cartoonist and artist, best known for her autobiographical works such as Dirty Plotte and My New York Diary. Her work is concerned with such topics as "sex, violence, menstruation and male/female issues."

Doucet was born in Montreal, Quebec. She was educated first at an all-girls Catholic school, then studied fine arts at Cégep du Vieux Montréal (a junior college) and afterwards at the Université du Québec à Montréal. Her university degree was in printing arts. She began cartooning in 1987. She was published in small-press comics and self-published her own comic called Dirty Plotte. She used the photocopied zine to record "her day to day life, her dreams, angsts, [and] fantasies." It was only when she was published in Weirdo, Robert Crumb's magazine, that she began to attract critical attention.

Doucet began being published by Drawn & Quarterly in January 1991 in a regular sized comic series also named Dirty Plotte. Shortly thereafter, she moved to New York. Although she moved to Seattle the following year, her experiences in New York formed the basis of the critically acclaimed My New York Diary (many stories of which were taken from Dirty Plotte). She moved from Seattle to Berlin in 1995, before finally returning to Montreal in 1998. While in Berlin, she had a book named Ciboire de criss published by L'Association in Paris, her first book in French. Once back in Montreal, she released the twelfth and final issue of Dirty Plotte before beginning a brief hiatus from comics.

She returned to the field in 2000 with The Madame Paul Affair, a slice-of-life look at contemporary Montreal which was originally serialized in Ici-Montreal, a local alternative weekly. At the same time, she was branching out into more experimental territory, culminating with the 2001 release of Long Time Relationship, a collection of prints and engravings. In 2004, Doucet also published in French an illustrated diary (Journal) chronicling about a year of her life and, in 2006, an autobiography made from a collage of words cut from magazines and newspapers (J comme Je). Also in spring of 2006 she had her first solo print show, named en souvenir du Melek, at the galerie B-312 in Montreal. In December 2007, Drawn & Quarterly published 365 Days: A Diary by Julie Doucet, in which she chronicled her life for a year, starting in late 2002.

She remains a fixture in the Montreal arts community, but in an interview in the June 22, 2006, edition of the Montreal Mirror, she declared that she had retired from long-form comics.

She also said "...it's quite a lot of work, and not that much money. I went to a newspaper to propose a comic strip because I only had to draw a small page and it would be out the next week. For once it was regular pay and good money."

She had a book of poetry published by L’Oie de Cravan in 2006, À l’école de l’amour. Her current artwork consists of linocuts, collage and papier-mache sculptures. In 2007, Doucet designed the cover for the Penguin Classics Deluxe Edition of Louisa May Alcott's Little Women.

In 1991, Dirty Plotte was nominated for best new series and Doucet won the Harvey Award for "Best New Talent". In 1999, when The Comics Journal made a list of the top 100 comics of all time, she was on several of the short-lists and Dirty Plotte ranked 96th. In 2000, her book My New York Diary won the Firecracker award for best graphic novel. Doucet's book 365 Days: A Diary was nominated for best book award at the 2009 Doug Wright Awards. 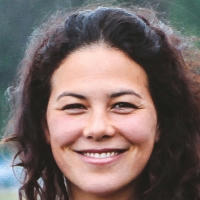