Julian Schwinger, winner of the 1965 Nobel Prize in Physics. Original caption: "His laboratory is his ballpoint pen."

Julian Seymour Schwinger (/ˈʃwɪŋər/; February 12, 1918 – July 16, 1994) was a Nobel Prize winning American theoretical physicist. He is best known for his work on the theory of quantum electrodynamics (QED), in particular for developing a relativistically invariant perturbation theory, and for renormalizing QED to one loop order. Schwinger was a physics professor at several universities.

Schwinger is recognized as one of the greatest physicists of the twentieth century, responsible for much of modern quantum field theory, including a variational approach, and the equations of motion for quantum fields. He developed the first electroweak model, and the first example of confinement in 1+1 dimensions. He is responsible for the theory of multiple neutrinos, Schwinger terms, and the theory of the spin 3/2 field.

Julian Seymour Schwinger was born in New York City, to Jewish parents originally from Poland, Belle (née Rosenfeld) and Benjamin Schwinger, a garment manufacturer, who had migrated to America. Both his father and his mother's parents were prosperous clothing manufacturers, although the family business declined after the Wall Street Crash of 1929. The family followed the Orthodox Jewish tradition. Schwinger attended the Townsend Harris High School and then the City College of New York as an undergraduate before transferring to Columbia University, where he received his B.A. in 1936 and his Ph.D. (overseen by Isidor Isaac Rabi) in 1939 at the age of 21. He worked at the University of California, Berkeley (under J. Robert Oppenheimer), and was later appointed to a position at Purdue University.

After having worked with Oppenheimer, Schwinger's first regular academic appointment was at Purdue University in 1941. While on leave from Purdue, he worked at the Radiation Laboratory at MIT instead of at the Los Alamos National Laboratory during World War II. He provided theoretical support for the development of radar. After the war, Schwinger left Purdue for Harvard University, where he taught from 1945 to 1974. In 1966 he became the Eugene Higgins professor of physics at Harvard.

Schwinger developed an affinity for Green's functions from his radar work, and he used these methods to formulate quantum field theory in terms of local Green's functions in a relativistically invariant way. This allowed him to calculate unambiguously the first corrections to the electron magnetic moment in quantum electrodynamics. Earlier non-covariant work had arrived at infinite answers, but the extra symmetry in his methods allowed Schwinger to isolate the correct finite corrections.

In the same era, he introduced non-perturbative methods into quantum field theory, by calculating the rate at which electron-positron pairs are created by tunneling in an electric field, a process now known as the "Schwinger effect". This effect could not be seen in any finite order in perturbation theory.

Schwinger's foundational work on quantum field theory constructed the modern framework of field correlation functions and their equations of motion. His approach started with a quantum action and allowed bosons and fermions to be treated equally for the first time, using a differential form of Grassman integration. He gave elegant proofs for the spin-statistics theorem and the CPT theorem, and noted that the field algebra led to anomalous Schwinger terms in various classical identities, because of short distance singularities. These were foundational results in field theory, instrumental for the proper understanding of anomalies.

In other notable early work, Rarita and Schwinger formulated the abstract Pauli and Fierz theory of the spin 3/2 field in a concrete form, as a vector of Dirac spinors. In order for the spin-3/2 field to interact consistently, some form of supersymmetry is required, and Schwinger later regretted that he had not followed up on this work far enough to discover supersymmetry.

Schwinger discovered that neutrinos come in multiple varieties, one for the electron and one for the muon. Nowadays there are known to be three light neutrinos; the third is the partner of the tau lepton.

In the 1960s, Schwinger formulated and analyzed what is now known as the Schwinger model, quantum electrodynamics in one space and one time dimension, the first example of a confining theory. He was also the first to suggest an electroweak gauge theory, an SU(2) gauge group spontaneously broken to electromagnetic U(1) at long distances. This was extended by his student Sheldon Glashow into the accepted pattern of electroweak unification. He attempted to formulate a theory of quantum electrodynamics with point magnetic monopoles, a program which met with limited success because monopoles are strongly interacting when the quantum of charge is small.

Having supervised 73 doctoral dissertations , Schwinger is known as one of the most prolific graduate advisors in physics. Four of his students won Nobel prizes: Roy Glauber, Benjamin Roy Mottelson, Sheldon Glashow and Walter Kohn (in chemistry).

Schwinger had a mixed relationship with his colleagues, because he always pursued independent research, different from mainstream fashion. In particular, Schwinger developed the source theory, a phenomenological theory for the physics of elementary particles, which is a predecessor of the modern effective field theory. It treats quantum fields as long-distance phenomena and uses auxiliary 'sources' that resemble currents in classical field theories. The source theory is a mathematically consistent field theory with clearly derived phenomenological results. The criticisms by his Harvard colleagues led Schwinger to leave the faculty in 1972 for UCLA. It is a story widely told that Steven Weinberg, who inherited Schwinger's paneled office in Lyman Laboratory, there found a pair of old shoes, with the implied message, "think you can fill these?". At UCLA, and for the rest of his career, Schwinger continued to develop the source theory and its various applications.

After 1989 Schwinger took a keen interest in the non-mainstream research of cold fusion. He wrote eight theory papers about it. He resigned from the American Physical Society after their refusal to publish his papers. He felt that cold fusion research was being suppressed and academic freedom violated. He wrote: "The pressure for conformity is enormous. I have experienced it in editors' rejection of submitted papers, based on venomous criticism of anonymous referees. The replacement of impartial reviewing by censorship will be the death of science."

In his last publications, Schwinger proposed a theory of sonoluminescence as a long distance quantum radiative phenomenon associated not with atoms, but with fast-moving surfaces in the collapsing bubble, where there are discontinuities in the dielectric constant. The mechanism of sonoluminescence now supported by experiments focuses on superheated gas inside the bubble as the source of the light.

Schwinger was jointly awarded the Nobel Prize in Physics in 1965 for his work on quantum electrodynamics (QED), along with Richard Feynman and Shin'ichirō Tomonaga. Schwinger's awards and honors were numerous even before his Nobel win. They include the first Albert Einstein Award (1951), the U.S. National Medal of Science (1964), honorary D.Sc. degrees from Purdue University (1961) and Harvard University (1962), and the Nature of Light Award of the U.S. National Academy of Sciences (1949).

As a famous physicist, Schwinger was often compared to another legendary physicist of his generation, Richard Feynman. Schwinger was more formally inclined and favored symbolic manipulations in quantum field theory. He worked with local field operators, and found relations between them, and he felt that physicists should understand the algebra of local fields, no matter how paradoxical it was. By contrast, Feynman was more intuitive, believing that the physics could be extracted entirely from the Feynman diagrams, which gave a particle picture. Schwinger commented on Feynman diagrams in the following way,

Like the silicon chips of more recent years, the Feynman diagram was bringing computation to the masses.

Schwinger disliked Feynman diagrams because he felt that they made the student focus on the particles and forget about local fields, which in his view inhibited understanding. He went so far as to ban them altogether from his class, although he understood them perfectly well. The true difference is however deeper, and it was expressed by Schwinger in the following passage,

Eventually, these ideas led to Lagrangian or action formulations of quantum mechanics, appearing in two distinct but related forms, which I distinguish as differential and integral. The latter, spearheaded by Feynman has had all the press coverage, but I continue to believe that the differential viewpoint is more general, more elegant, more useful.

Despite sharing the Nobel Prize, Schwinger and Feynman had a different approach to quantum electrodynamics and to quantum field theory in general. Feynman used a regulator, while Schwinger was able to formally renormalize to one loop without an explicit regulator. Schwinger believed in the formalism of local fields, while Feynman had faith in the particle paths. They followed each other's work closely, and each respected the other. On Feynman's death, Schwinger described him as

An honest man, the outstanding intuitionist of our age, and a prime example of what may lie in store for anyone who dares to follow the beat of a different drum. 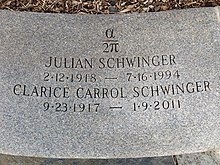 The headstone of Julian Schwinger at Mt Auburn Cemetery in Cambridge, MA.

Schwinger died of pancreatic cancer. He is buried at Mount Auburn Cemetery;

is engraved above his name on his tombstone. These symbols refer to his calculation of the correction ("anomalous") to the magnetic moment of the electron.