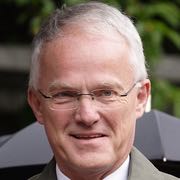 Jürgen Rüttgers (born 26 June 1951 in Cologne) is a German politician of the Christian Democratic Union (CDU) who served as the 9th Minister President of North Rhine-Westphalia from 2005 to 2010.

Rüttgers holds degrees in Law and History from the University of Cologne and a Dr. Jur. (Ph.D.) in Law (1979). He became a member of K.D.St. V. Rappoltstein Köln, a Catholic student fraternity that is member of the Cartellverband.

Rüttgers served as Federal Minister for Education, Science, Research and Technology in Chancellor Helmut Kohl's fifth cabinet from 1994 to 1998. During his time as minister, he was – together with Luigi Berlinguer (Italy), Claude Allegre (France), and Baroness Tessa Blackstone (United Kingdom) – one of the heads of the "Sorbonne declaration", the joint declaration on harmonisation of the architecture of the European higher education system, on 25 May 1998. That was the starting point of the so-called "Bologna process". He also successfully introduced a law under which online providers can be prosecuted for offering a venue for content illegal in Germany – such as child pornography or Nazi propaganda – if they do so knowingly and it is "technically possible and reasonable" to prevent it. Also, the law made Germany the first country to set rules for so-called digital signatures and give them the status of a legal document.

Between 1998 and 2000, Rüttgers served as deputy chairman of the CDU/CSU parliamentary group, again under Schäuble's leadership. In 2000, he succeeded Norbert Blüm as chairman of the CDU in the state of North Rhine-Westphalia. As head of the party in Germany's most populous state, he commanded considerable influence, especially with its grassroots. He also became the party's group leader in the state parliament and was elected as one of the CDU's deputy party chairmen in 2000.

Amid the revelations of the CDU donations scandal in early 2000, Rüttgers – who ran as the party's candidate in a crucial state election in North Rhine-Wesphalia that year – was one of the few leading figures who remained loyal to former Chancellor Helmut Kohl even after prosecutors began a criminal investigation into Kohl's financial dealings. By January 2000, daily newspaper Süddeutsche Zeitung claimed that Kohl, angered by party chairman Wolfgang Schäuble's efforts to distance himself from the scandal surrounding secret payments to the party, was encouraging Rüttgers to make a bid for the leadership at the CDU's annual conference; instead, Angela Merkel was elected as Schäuble's successor and Rüttgers became one of her four deputies, alongside Volker Rühe, Annette Schavan and Christian Wulff.

In his role as chairman of the CDU in North Rhine-Westphalia, Rüttgers later publicly endorsed Merkel as the party's candidate to challenge incumbent Chancellor Gerhard Schröder in the 2002 federal elections; instead, Edmund Stoiber ended up being the joint candidate of CDU and CSU.

In the state parliament (Landtag) election 2005, Rüttgers was the opposition Christian Democratic Union's front-runner for the second time. After CDU and FDP won a majority of seats in the election on 22 May 2005, they formed a coalition to take over government from the former SPD and Green party coalition led by Peer Steinbrück.

Rüttgers was elected Minister-President of North Rhine-Westphalia on 22 June. In his cabinet, he notably included representatives of the Christian Democrats’ more liberal wing, such as Armin Laschet (as State Minister for Generations, Family, Women and Integration) and Karl-Josef Laumann (as State Minister of Labor, Health and Social Affairs).

On the national level, Rüttgers was part of the CDU/CSU team in the negotiations with the SPD on a coalition agreement following the 2005 federal elections, which paved the way to the formation of Chancellor Angela Merkel’s first government. Under the leadership of Merkel as party chairwoman, he was re-elected vice-chairman of the CDU in November 2006, this time alongside Roland Koch, Annette Schavan and Christian Wulff.

During his time in office, Rüttgers came under severe criticism for failing to mend the state's public finances. One of the reasons was the crisis at the state-owned lender WestLB, which led his government to set aside 1.5 billion in 2008. Rüttgers long wanted the bank to stay independent and categorically ruled out a merger with LBBW. However, by 2007, he and Roland Koch, his counterpart from the state of Hesse, agreed on approving a merger of their respective state-owned banks, WestLB and Landesbank Hessen-Thüringen (Helaba). WestLB was eventually broken up in 2012 after years of losses and controversy.

Between 2007 and 2009, Rüttgers was one of 32 members of the Second Commission on the modernization of the federal state, which had been established to reform the division of powers between federal and state authorities in Germany.

Shortly before the 2010 state elections, Rüttgers's public image was damaged by a party fund-raising scandal, and local issues like education and the troubles of municipalities with heavy debt burdens were central to the campaign. He led his party to an electoral defeat; the steep drop of 10 percentage points compared with the previous election, in 2005, was even larger than most analysts had predicted and gave the Christian Democrats their worst postwar showing in that state. The loss also meant Chancellor Angela Merkel could no longer count on a majority for her governing coalition in the Bundesrat, composed of delegations from all 16 states. In July 2010, Rüttgers stepped down as caretaker premier and also gave up his position as state party chairman.

In May 2011, Deutsche Bahn nominated Rüttgers as executive director of the Brussels-based Community of European Railway and Infrastructure Companies (CER); instead, Libor Lochman was eventually appointed to the position.

Rüttgers was a CDU delegate to the Federal Convention for the purpose of electing the President of Germany in 2017.

In addition, Rüttgers has held several paid and unpaid positions since leaving politics, including the following:

During his political career, Rüttgers proved to be a conservative on social issues such as immigration. He also positioned himself as a "workers' leader" on economics, defending labor rights and opposing business demands for deregulation of the economy. Unlike many in his party at the time, he was also in favor of expanding day care for young children and supported all-day schools. Following the CDU's performance in the 2005 federal elections and the formation of the first government under Chancellor Angela Merkel, Rüttgers blamed her campaign for talking “too much about flat tax and not enough about the people.” Instead, he called on the party to shed its “capitalist” image.

In his 1993 book Dinosaurs of Democracy, Rüttgers attacked Germany's main parties and the government for being unwilling to decentralise political power to ordinary people.

Rüttgers is widely known for his views on immigration and the much-discussed phrase "Kinder statt Inder" ("children instead of Indians") which was a media interpretation of "Statt Inder an die Computer müssen unsere Kinder an die Computer" ("instead of Indians in front of computers, our children must be in front of computers"), during an election campaign (which he eventually lost) at a time when there was a parallel nationwide discussion about whether or not immigration rules should be liberalised on behalf of attracting more highly qualified foreign academics to the German labor market.

In response to Rüttgers's much-discussed phrase Kinder statt Inder, Germany's Green Party overwhelmed his Internet mailbox with thousands of messages. The Internet attack was the first of its kind in German politics.