Josef Frank (July 15, 1885 – January 8, 1967) was an Austrian-born architect, artist, and designer who adopted Swedish citizenship in the latter half of his life. Together with Oskar Strnad, he created the Vienna School of Architecture, and its concept of Modern houses, housing and interiors.

Josef Frank was of Jewish ancestry. His parents, merchant Ignaz (Isak) Frank (October 17, 1851 – January 27, 1921 Vienna) and the Vienna-born Jenny (September 3, 1861–10 February 1941 Vienna), were originally from Heves in Hungary. He designed his parents' grave in the old Jewish section of Vienna's Central Cemetery (Group 19, Row 58, Grave No.52). He studied architecture at the Vienna University of Technology. He then taught at the Vienna School of Arts and Crafts from 1919 to 1925. He was a founding member of the Vienna Werkbund, initiator and leader of the 1932 project Werkbundsiedlung in Vienna. In 1933, he emigrated to Sweden, where he gained citizenship in 1939. He was the most prestigious designer in the Stockholm design company Svenskt Tenn (Swedish Pewter). He remained in Sweden after 1945 despite attempts to return him to Vienna. The Vienna Circle manifesto lists three of his publications in a bibliography of closely related authors. He was also the brother of the physicist, mathematician, and philosopher Philipp Frank.

Josef Frank dealt early on with public housing and housing estates. Contrary to most other architects of the interwar period in Vienna, he took the idea of settlement and not the creation of so-called super blocks in the municipal housing. He also rejected facade decor and clearly preferred functional forms. The Viennese architect and furniture designer Luigi Blue refers to him as one of his idols. In addition to his architectural work he created numerous designs for furniture, furnishings, fabrics, wallpaper and carpet. He has been a painter, as well.

An exhibition of his textile designs is to be held from January to May 2017, at the Fashion and Textile Museum in London.

The contents of this page are sourced from Wikipedia article on 10 Mar 2020. The contents are available under the CC BY-SA 4.0 license.
View Josef Frank 's image gallery
Image Gallery 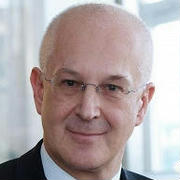