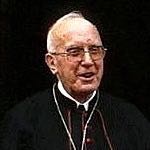 José Maurer was born in Püttlingen, and entered the Congregation of the Most Holy Redeemer, more commonly known as the Redemptorists, on September 10, 1921. After studying in Switzerland and Luxembourg, he was ordained to the priesthood on September 19, 1925. He then did missionary work with the Bolivian Indians, serving as superior of the Redemptorist residence in La Paz from 1926 to 1947, when he became vice-provincial of his congregation for South America.

On March 1, 1950, Maurer was appointed Auxiliary Bishop of La Paz and Titular Bishop of Cea by Pope Pius XII. He received his episcopal consecration on the following April 16 from Cardinal Adeodato Giovanni Piazza, OCD, with Archbishop Francesco Beretti and Bishop Augusto Sieffert, CSSR, serving as co-consecrators. Maurer was later promoted to Archbishop of Sucre on October 27, 1951, and attended the Second Vatican Council from 1962 to 1965.

Pope Paul VI created him Cardinal Priest of Ss. Redentore e S. Alfonso in Via Merulana in the consistory of June 26, 1967; Maurer was the first cardinal from Bolivia. He was one of the cardinal electors who participated in the conclaves of August and October 1978, which selected Popes John Paul I and John Paul II respectively. Maurer resigned his post as Archbishop on November 30, 1983, after twenty-nine years of service.

The Cardinal died in Sucre, at age 90. He is buried in the metropolitan cathedral.