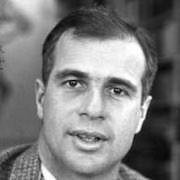 John Richard Hersey (June 17, 1914 – March 24, 1993) was a Pulitzer Prize-winning American writer and journalist considered one of the earliest practitioners of the so-called New Journalism, in which storytelling techniques of fiction are adapted to non-fiction reportage. Hersey's account of the aftermath of the atomic bomb dropped on Hiroshima, Japan, was adjudged the finest piece of American journalism of the 20th century by a 36-member panel associated with New York University's journalism department.

Hersey was born in Tientsin, China, the son of Grace Baird and Roscoe Hersey, Protestant missionaries for the Young Men's Christian Association in Tientsin. Hersey learned to speak Chinese before he spoke English; Hersey's novel, The Call (1985), is based on the lives of his parents and several other missionaries of their generation. John Hersey was a descendant of William Hersey (or Hercy, as the family name was then spelled) of Reading, Berkshire, England. William Hersey was one of the first settlers of Hingham, Massachusetts in 1635.

Hersey returned to the United States with his family when he was ten years old. He attended public school in Briarcliff Manor, New York, including Briarcliff High School for two years. At Briarcliff, he became his troop's first Eagle Scout. Later he attended the Hotchkiss School, followed by Yale University, where he was a member of the Skull and Bones Society.:127 Hersey lettered in football at Yale, was coached by Ducky Pond, Greasy Neale and Gerald Ford and was a teammate of Yale's two Heisman Trophy winners, Larry Kelley and Clint Frank. He subsequently was a graduate student at the University of Cambridge as a Mellon Fellow. After his time at Cambridge, Hersey got a summer job as private secretary and driver for author Sinclair Lewis during 1937; but he chafed at his duties, and that autumn he began work for Time, for which he was hired after writing an essay on the magazine's dismal quality. Two years later he was transferred to Time's Chongqing bureau.

During World War II, newsweekly correspondent Hersey covered fighting in Europe as well as Asia, writing articles for Time as well as Life magazine. He accompanied Allied troops on their invasion of Sicily, survived four airplane crashes, and was commended by the Secretary of the Navy for his role in helping evacuate wounded soldiers from Guadalcanal.

After the war, during the winter of 1945–46, Hersey was in Japan, reporting for The New Yorker on the reconstruction of the devastated country, when he found a document written by a Jesuit missionary who had survived the atomic bomb dropped on Hiroshima. The journalist visited the missionary, who introduced him to other survivors. Soon afterward John Hersey began discussions with William Shawn, an editor for The New Yorker, about a lengthy piece about the previous summer's bombing. Hersey proposed a story that would convey the cataclysmic narrative through individuals who survived. The next May, 1946, Hersey traveled to Japan, where he spent three weeks doing research and interviewing survivors. He returned to America during late June and began writing about six Hiroshima survivors: a German Jesuit priest, a widowed seamstress, two doctors, a minister, and a young woman who worked in a factory.

The result was his most notable work, the 31,000-word article "Hiroshima", which was published in the August 31, 1946, issue of The New Yorker. The story dealt with the atomic bomb dropped on that Japanese city on August 6, 1945, and its effects on the six Japanese citizens. The article occupied almost the entire issue of the magazine – something The New Yorker had never done before, nor has it since.

Hersey himself often decried the New Journalism, which in many ways he had helped create. He would have probably disagreed with a description of his article on the effects of the atomic bomb as New Journalism. Later, the ascetic Hersey came to feel that some elements of the New Journalism of the 1970s were not rigorous enough about fact and reporting. After publication of Hiroshima, Hersey noted that "the important 'flashes' and 'bulletins' are already forgotten by the time yesterday morning's paper is used to line the trash can. The things we remember are emotions and impressions and illusions and images and characters: the elements of fiction."

Shortly before writing Hiroshima, Hersey published his novel Of Men and War, an account of war stories seen through the eyes of soldiers rather than a war correspondent. One of the stories in Hersey's novel was inspired by President John F. Kennedy and the PT-109. Soon afterward, the former war correspondent began publishing mostly fiction. Hersey's war novel The Wall (1950) presented as a rediscovered journal recording the genesis and destruction of the Warsaw Ghetto, the largest of the Jewish ghettos established by Nazi Germany during the Holocaust. The bestselling book won the National Jewish Book Award during the second year of that award's existence; it also received the Sidney Hillman Foundation Journalism Award.

His article about the dullness of grammar school readers in a 1954 issue of Life magazine, "Why Do Students Bog Down on First R? A Local Committee Sheds Light on a National Problem: Reading" was the inspiration for Dr. Seuss's juvenile story The Cat in the Hat. Further criticisms of the school system came with The Child Buyer (1960), a speculative-fiction novel. Hersey also wrote The Algiers Motel Incident, about a racially motivated shooting by police during the 12th Street Riot in Detroit, Michigan, during 1968. Hersey's first novel A Bell for Adano, about the Allied occupation of a Sicilian town during World War II, won the Pulitzer Prize for the Novel in 1945, and was adapted into the 1945 movie A Bell for Adano directed by Henry King, featuring John Hodiak and Gene Tierney. His 1956 short novel, A Single Pebble is the tale of a young American engineer traveling up the Yangtze on a river junk during the 1920s and discovering that his romantic concepts of China bring disaster. His 1965 novel, White Lotus, is exploration of the African American experience prior to civil rights as reflected in an alternate history in which white Americans are enslaved by the Chinese after losing "the Great War" to them.

From 1965 to 1970, Hersey was master of Pierson College, one of twelve residential colleges at Yale University, where his outspoken activism and early opposition to the Vietnam War made him controversial with alumni, but admired by many students. After the trial of the Black Panthers in New Haven, Connecticut, Hersey wrote Letter to the Alumni (1970), in which the former Yale College master sympathetically addressed civil rights and anti-war activism – and attempted to explain them to sometimes-aggravated alumni.

For 18 years Hersey also taught two writing courses, in fiction and non-fiction, to undergraduates. Hersey taught his last class in fiction writing at Yale during 1984. In his individual sessions with undergraduates to discuss their work, the Pulitzer Prize-winning author was sometimes known to write his comments in the margin, and having discussed his suggestion with the student, to then take out his pencil and erase his comment. As Master of Pierson College, he subsequently hosted his old boss Henry Luce – with whom Hersey had become reconciled after their dispute years prior – when Luce spoke to the college's undergraduates. Time founder Luce was a notoriously dull public speaker, and his address to the Pierson undergraduates was no exception. After Luce's somnolent speech, the former publisher privately revealed to Hersey for the first time that he and his wife Clare Boothe Luce had taken LSD while supervised by a physician. Hersey later confessed he was relieved that Luce had saved that particular revelation for a more private audience.

In 1969 Hersey donated the services of his bulldog 'Oliver' as mascot for the Yale football team. Making his debut during the autumn of 1969, Handsome Dan XI (the Yale bulldog's traditional name) had Hersey concerned about the dog's interest level. A football fan himself, Hersey had wondered aloud "whether Oliver would stay awake for two hours." With a new mascot, the sometimes hapless Yale team finished the season with a 7–2 record.

During 1985 John Hersey returned to Hiroshima, where he reported and wrote Hiroshima: The Aftermath, a follow-up to his original story. The New Yorker published Hersey's update in its July 15, 1985, issue, and the article was subsequently appended to a newly revised edition of the book. "What has kept the world safe from the bomb since 1945 has not been deterrence, in the sense of fear of specific weapons, so much as it's been memory", wrote Hersey. "The memory of what happened at Hiroshima".

John Hersey has been called a "compulsive plagiarist." For instance, he used complete paragraphs from the James Agee biography by Laurence Bergreen in his own New Yorker essay about Agee. Half of his book, Men on Bataan came from work filed for Time by Melville Jacoby and his wife. Writer Ralph Ellison, longtime friend of John Hersey, with whom he shared a compound in Key West

A longtime resident of Vineyard Haven, Martha's Vineyard, Massachusetts – chronicled in his 1987 work Blues – John Hersey died at his winter home in Key West, Florida, on March 24, 1993 at the compound he and his wife shared with his friend, writer Ralph Ellison. Ellison's novel Invisible Man was one of Hersey's favorite works, and he often urged students in his fiction-writing seminar to study Ellison's storytelling techniques and descriptive prose. Hersey's death was front-page news in the next day's New York Times. The writer was buried near his home on Martha's Vineyard. He was survived by his second wife, Barbara (the former wife of Hersey's colleague at The New Yorker, artist Charles Addams, and the model for Morticia Addams), Hersey's five children, one of whom is the composer and musician Baird Hersey, and six grandchildren. Barbara Hersey died on Martha's Vineyard 14 years later on August 16, 2007. During 1968, John Hersey High School in Arlington Heights, Illinois was named in his honor.

Soon before Hersey's death, then Acting President of Yale Howard Lamar decided the university should honor its longserving alumnus. The result was the annual John Hersey Lecture, the first of which was delivered March 22, 1993, by historian and Yale graduate David McCullough, who noted Hersey's contributions to Yale but reserved his strongest praise for the former magazine writer's prose. Hersey had "portrayed our time", McCullough observed, "with a breadth and artistry matched by very few. He has given us the century in a great shelf of brilliant work, and we are all his beneficiaries."

The John Hersey Prize at Yale was endowed during 1985 by students of the author and former Pierson College master. The prize is awarded to "a senior or junior for a body of journalistic work reflecting the spirit and ideals of John Hersey: engagement with moral and social issues, responsible reportage and consciousness of craftsmanship." Winners of the John Hersey Prize include David M. Halbfinger (Yale Class of 1990) and Motoko Rich (Class of 1991), who both later had reporting careers for The New York Times, and journalist Jacob Weisberg (Class of 1985), current editor-in-chief of The Slate Group. Among Hersey's earlier students at Yale was Michiko Kakutani, currently the chief book critic of The New York Times, as well as film critic Gene Siskel.

During his lifetime, Hersey served in many jobs associated with writing, journalism and education. He was the first non-academic named master of a Yale residential college. He was past president of the Authors League of America, and he was elected chancellor by the membership of the American Academy of Arts and Letters. Hersey was an honorary fellow of Clare College, Cambridge University. He was awarded honorary degrees by Yale University, the New School for Social Research, Syracuse University, Washington and Jefferson College, Wesleyan University, The College of William and Mary and others.