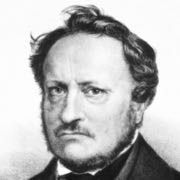 Johannes Peter Müller (14 July 1801 – 28 April 1858) was a German physiologist, comparative anatomist, ichthyologist, and herpetologist, known not only for his discoveries but also for his ability to synthesize knowledge.

Müller was born in Koblenz. He was the son of a poor shoemaker, and was about to be apprenticed to a saddler when his talents attracted the attention of his teacher, and he prepared himself to become a Roman Catholic Priest. During his college course in Koblenz, he devoted himself to the classics and made his own translations of Aristotle. At first, his intention was to become a priest.

When he was 18 though, his love for natural science became dominant, and he turned to medicine, entering the University of Bonn in 1819. There he received his M.D.. He then studied at Berlin. There, under the influence of Hegel and Rudolphi, he was induced to reject all systems of physiology which were not founded upon a strict observation of nature.

Müller made contributions in numerous domains of physiology, in particular increasing understanding of the voice, speech and hearing, as well as the chemical and physical properties of lymph, chyle and blood. His first important works, Zur vergleichenden Physiologie des Gesichtssinns (“On the comparative physiology of sight,” Leipzig, 1826) and Über die phantastischen Gesichtserscheinungen (“On visual hallucination,” Coblenz, 1826), are of a subjective philosophical tendency. The first work concerns the most important facts as to human and animal sight, the second sounds depths of difficult psychological problems. He soon became the leader in the science of the morphological treatment of zoology as well as of experimental physiology. To his research (1830) is due the settlement of the theory of reflex action.

In the century preceding Müller's work, many contributions to physiological science had been made. Müller gave order to these facts, developed general principles and showed physiologists how recent discoveries in physics and chemistry could be applied to their work. The appearance of his magnum opus, Handbuch der Physiologie des Menschen, between 1833 and 1840 (translated into English as “Elements of Physiology” by William Baly, and published in London 1837–1843) marked the beginning of a new period in the study of physiology. In it, for the first time, the results of human and comparative anatomy, as well as of chemistry and other departments of physical science, and tools like the microscope, were brought to bear on the investigation of physiological problems.

The most important portion of the work was that dealing with nervous action and the mechanism of the senses. Here he stated the principle, previously recognized but not stated as clearly, that the kind of sensation following stimulation of a sensory nerve does not depend on the mode of stimulation but upon the nature of the sense organ. Thus light, pressure, or mechanical stimulation acting on the retina and optic nerve invariably produces luminous impressions. This he termed the law of specific energies of the sense.

The book became the leading textbook in physiology for much of the nineteenth century. It manifests Müller's interests in vitalism, philosophy and scientific rigor. He discusses the difference between inorganic and organic matter. He considers in detail various physiological systems of a wide variety of animals, but attributes the indivisible whole of an organism to the presence of a soul. He also proposes that living organisms possess a life-energy for which physical laws can never fully account.

Edward Forbes F.R.S. in his A History of British Starfishes, and Other Animals of the Class Echinodermata (1841) in his preface refers to Muller as the "one of the greatest living physiologists, Muller of Berlin".

In the later part of his life he chiefly devoted himself to comparative anatomy. Fishes and marine invertebrata were his favorite subjects. He took 19 trips to the Baltic and North Sea, the Adriatic and the Mediterranean to investigate salt-water life.

He authored a comprehensive work on the anatomy of amphibians, which in his era including reptiles. Also, he described several new species of snakes.

Müller died in Berlin in 1858. In 1899, a bronze statue by Joseph Uphues was erected in his memory in Koblenz.

In addition to his Handbuch der Physiologie (translated by Baly in 1843: Elements of Physiology), his publications include: