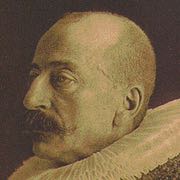 Burchard was born in Bremen, a member of the Hanseatic Burchard family, the son of banker Friedrich Wilhelm Burchard (1824–92) and Marianne Gossler (1830–1908), a granddaughter of Senator and banker Johann Heinrich Gossler and a great-granddaughter of Johann Hinrich Gossler and Elisabeth Berenberg. His father was a merchant in Bremen, who in 1853 became a partner of the Berenberg Bank (Joh. Berenberg, Gossler & Co.) owned by his wife's family. The family then relocated to Hamburg, where, after taking part in the Franco-Prussian War as a volunteer, he completed his abitur at the Gelehrtenschule des Johanneums before studying Law at the Universities of Leipzig, Heidelberg and Göttingen.

As a typical Hanseat, he rejected noble titles and any form of awards.

A portrait of Burchard by Max Liebermann is displayed at Hamburg's representation (embassy) in Berlin.