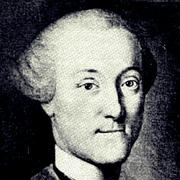 Johann Gottfried Zinn was born in Schwabach. Considering his short life span, Zinn made a great contribution to the study of anatomy. In his book Descriptio anatomica oculi humani, he provided the first detailed and comprehensive anatomy of the human eye.

In 1753 Johann Gottfried Zinn became director of the Botanic garden of the University of Göttingen, and in 1755, professor in the medical faculty.

In 1757 Zinn described the orchid genus Epipactis that belongs to the family Orchidaceae.

He died in Göttingen.

Botanist Carl Linnaeus designated a genus of flowers in the family Asteraceae native from Mexico as Zinnia in his honour.

The standard author abbreviation Zinn is used to indicate this person as the author when citing a botanical name.
The contents of this page are sourced from Wikipedia article on 09 Mar 2020. The contents are available under the CC BY-SA 4.0 license.
View Johann Gottfried Zinn 's image gallery
Image Gallery

Christian I, Count of Oldenburg