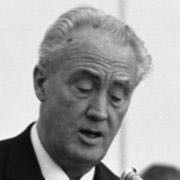 Member of the German Bundestag

Johann Baptist Gradl (25 March 1904 in Berlin – 2 July 1988 in Berlin), was a German politician and member of the Christian Democratic Union.

During the Weimar Republic Gradl was a member of the Zentrumspartei and he was its president in Berlin-Kreuzberg from 1930 to 1933.

Gradl was married to Marianne Brecour, and they had four children. He was a member of the Catholic parish of Mater Dolorosa in Berlin-Lankwitz and he is buried in a tomb of honour in Berlin-Tempelhof.