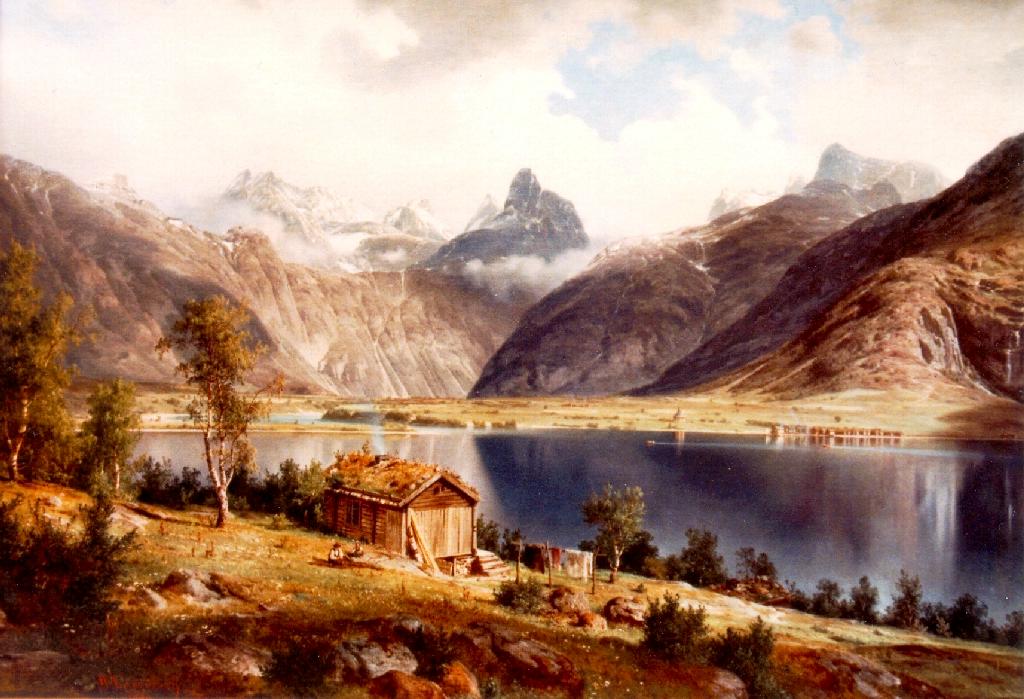 Johan Fredrik Eckersberg (16 June 1822 – 13 July 1870) was a Norwegian painter most noted for his landscapes. Eckersberg was a prominent figure in the transition from Romanticism to Realism in 19th-century Norwegian art, both as an artistic painter and a teacher at his own art school in Oslo.

Johan Fredrik Eckersberg was born in Drammen in Buskerud county, Norway. He was placed in a mercantile office in Oslo (then Christiania) at the age of eighteen, but having previously been in the Netherlands for several years, and visited Amsterdam, he had there imbibed a taste for art, so that after two years, against his father's wish, he relinquished his post, and entered the technical drawing-school in Christiania. Rapidly developing his talent for painting, Eckersberg trained at the School of Drawing ( Tegneskolen), under Johannes Flintoe (1843–46). He obtained one of the Government stipends for young artists and went to Düsseldorf, where he studied landscape painting under Johann Wilhelm Schirmer (1846–48).

During the summer of 1846, Eckersberg follow Hans Gude and August Cappelen on a study trip to Gudbrandsdalen, where they visited Vågå and Lom. He returned to Christiania in 1848, where his works commanded a very fair sale. Eckersberg was plagued by bad lungs and needed a to stay in a warm climate. In 1852, he was obliged to visit Madeira for his health, where, having first devoted his time to portrait painting to increase his rather slender funds, he traveled over the island, making sketches, from which he afterwards painted his magnificent series of pictures of Madeira.

In 1850, he was admitted as a member of the Norwegian Academy of Fine Arts, which served as the country's highest artistic authority. He also sat on the board of the National Gallery and Drawing School (1851–69) and the board of the Christiania Art Society from 1864. In 1859, he established an art school in Lille Grensen in Christiania. A number of later famous painters were students at his art school, including Gerhard Munthe and Christian Skredsvig. After his death the school would be continued by Morten Müller and Knud Bergslien.

Every summer from the date of his return to Norway he visited the most grand and picturesque spots in his native country, making sketches from which he afterwards elaborated his pictures. His most important images date from the 1860s. His Grand Panoramic Scene from a Norwegian Plateau was exhibited at the Paris Exhibition of 1867. He was not a great colourist and was too much a realist to be led by imagination. However, he made use of clear, cool colors, with magnificent views of plains and distant mountains. The National Museum of Art, Architecture and Design in Oslo owns two of his major works, Fra Valle i Setesdal (1852) and Fra Jotunheimen (1866), besides ten smaller landscapes.

In 1850 Johan Fredrik Eckersberg married Laura Martin Hansen (1821–1878). He was appointed a Knight of the Royal Norwegian Order of St. Olav in 1870. Eckersberg died of tuberculosis in Sandvika, near Christiania.