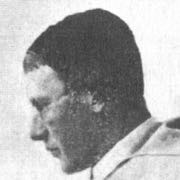 Adolf Josef Lanz a.k.a. Jörg Lanz, who called himself Lanz von Liebenfels (19 July 1874 – 22 April 1954), was an Austrian political and racial theorist and occultist, who was a pioneer of Ariosophy. He was a former monk and the founder of the magazine Ostara, in which he published anti-semitic and völkisch theories.

He was born on 19 July 1874 in the Penzing district of Vienna in what was then Austria-Hungary, as the son of schoolmaster Johann Lanz and his wife Katharina, née Hoffenreich. His parents were middle class, and his father's ancestors had been burghers in Vienna since the early 18th century. His mother was probably of Jewish ancestry which made him fail to meet his own standards for his organisation which he created in 1907 Ordo Novi Templi (Order of the New Templars) although he did manage to fake his own ancestry with the organisation and became known as the "Aryan" "Baron Adolf Georg (Jörg) Lanz Von Liebenfels Ph.D."

Lanz became a monk in the Cistercian order in 1893, assuming the name Georg and living in the Heiligenkreuz monastery. In 1894, he claimed to have been "enlightened" after finding the tombstone of a Knight Templar, and began developing his theories of "blue-blond Aryanism" and "lower races". He left the monastery in 1899; although Lanz claimed that this was due to "growing nervousness", the official documents recorded "carnal love" as the reason.

In 1905, he published his book Theozoölogie oder die Kunde von den Sodoms-Äfflingen und dem Götter-Elektron (Theozoology, or the Science of the Sodomite-Apelings and the Divine Electron) in which he advocated sterilization of the sick and the "lower races" as well as forced labour for "castrated chandals", and glorified the "Aryan race" as "Gottmenschen" ("god-men"). Lanz justified his esoteric racial ideology by attempting to give it a Biblical foundation; according to him, Eve, whom he described as initially being divine, involved herself with a demon and gave birth to the "lower races" in the process. Furthermore, he claimed that this led to blonde women being attracted primarily to "dark men", something that only could be stopped by "racial demixing" so that the "Aryan-Christian master humans" could "once again rule the dark-skinned beastmen" and ultimately achieve divinity. A copy of this book was sent to Swedish poet August Strindberg, from whom Lanz received an enthusiastic reply in which he was described as a "prophetic voice".

One year later, in 1905, he founded the magazine Ostara, Briefbücherei der Blonden und Mannesrechtler, of which he became the sole author and editor in 1908. Lanz himself claimed to have up to 100,000 subscribers, but it is generally agreed that this figure is grossly exaggerated. Readers of this publication included Adolf Hitler, Dietrich Eckart and the British Field Marshal Herbert Kitchener among others. Lanz claimed he was visited by the young Hitler in 1909, whom he supplied with two missing issues of the magazine.

As a student of Guido von List, Lanz further expanded his theories; other influences included Otto Weininger, of whom Lanz was a fervent follower.

In 1905 Lanz and some 50 other supporters of List signed a declaration endorsing the proposed Guido-von-List-Gesellschaft (Guido von List Society), which was officially founded in 1908. He also founded his own esoteric organisation, the Ordo Novi Templi (Order of the New Templars) in 1907. These movements were supposed to "further the racial self-confidence by doing pedigree and racial research, beauty contests and the founding of racist "future sites" in underdeveloped parts of the Earth" (das Rasse Bewusstsein durch Stammbaum- und Rassekunde Forschung, Schönheitswettbewerbe und die Gründung rassistischer Zukunftsstätten in unterentwickelten Teilen der Erde zu fördern). To further this agenda, he purchased the Werfenstein castle ruins in Austria. Neither organization managed to attract a large member base; though, it is estimated that the order had around 300 members, most prominent of which was the poet Fritz von Herzmanovsky-Orlando. Lanz's claim that the organization was already founded prior to 1900, and that he met with August Strindberg in 1896 and managed to convince him to join the order, have been shown to be fabricated.

After Hitler's rise to prominence in the 1920s, Lanz tried to be recognized as one of his ideological precursors. In the preface of issue one in the 3rd series of Ostara, c. 1927, he wrote:

After Austria was annexed by Nazi Germany in 1938, Lanz hoped for Hitler's patronage, but Hitler banned him from publishing his writings and copies of Ostara were removed from circulation. After the war, Lanz accused Hitler of having not only stolen but corrupted his idea, and also of being of "inferior racial stock".

There is no strong scholarly consensus as to whether Hitler was significantly influenced, directly or indirectly, by Lanz's work, and no strong evidence that he was interested in the occult movement as a whole apart from its racial aspects, though the association has been repeatedly made by critics and occultists during and after the Third Reich.

In his publications, Lanz mixed völkisch and anti-semitic ideas with Aryanism, racism and esotericism. The following is a partial list of Lanz's publications: