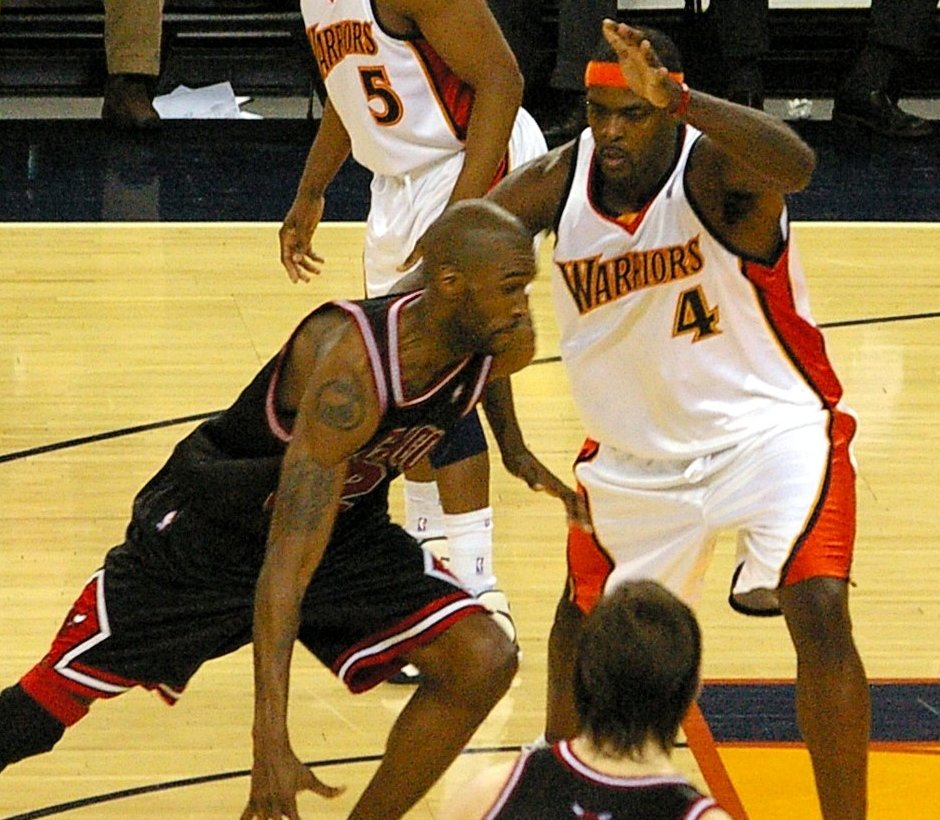 Joseph Leynard Smith (born July 26, 1975) is an American former professional basketball player who played at power forward position for 12 teams of the NBA during his 16-year career.

Born and raised in Norfolk, Virginia, Smith was the College Player of the Year at Maryland in 1995 and the No. 1 pick of that season's NBA draft, picked by the Golden State Warriors. He was named to the 1995–96 All-Rookie team. Smith was mobile throughout his career, the NBA indicated that he was one of the most traded players. In 1998, Smith was traded to the Philadelphia 76ers; he then played for the Minnesota Timberwolves (with a mid-way pitstop for the Detroit Pistons) until 2003. He later played for the Milwaukee Bucks, the Denver Nuggets, the 76ers again, the Chicago Bulls, the Oklahoma City Thunder, the Cleveland Cavaliers, the Atlanta Hawks, the New Jersey Nets, and the Los Angeles Lakers.

Smith attended Maury High School and played at the University of Maryland. In the 1995 NBA draft, Smith was selected by the Golden State Warriors as the first overall pick, before fellow power forwards Kevin Garnett, Antonio McDyess and Rasheed Wallace, as well as guard Jerry Stackhouse. Smith was named to the NBA All-Rookie First Team for the 1995–96 season and finished third in the Rookie of the Year voting to Damon Stoudamire and Arvydas Sabonis.

Joe Smith would play two-and-a-half years for the Warriors before being traded to the Philadelphia 76ers with Brian Shaw for Clarence Weatherspoon and Jim Jackson midway through the 1997–98 season. The trade was engineered by Golden State as Smith had made clear his desire to return to the east coast, and he was approaching free agency (halfway through the final year of his 3-year rookie contract).

Despite a drop in production, Smith was seen still as a hot commodity in the free agency blitz that followed the strike in late 1998. In what seemed at the time like a bizarre move, Smith signed for very little money with the Minnesota Timberwolves. For the next two years, Smith played very productively at small forward alongside All-Star Kevin Garnett.

Following the 1999–2000 season, it was discovered that Smith was involved in a salary cap–tampering scandal involving Timberwolves executive Kevin McHale. Smith was allegedly promised a future multimillion-dollar deal if he signed with the team for below market value, allowing the team to make some additional player moves in the short term. The league later found out about this violation and voided the last year of the contract, also severely punishing the Timberwolves by taking away five first-round draft picks (though two of the picks were ultimately returned) and fining the team $3.5 million. The move hurt the Timberwolves in the long run, as while the team still found success, the lack of draft picks set the team up for their eventual failure in the mid-2000s, which would continue well into the 2010s.

For the next three seasons Smith played for the Milwaukee Bucks. Prior to the 2006–07 season, Smith moved on to the Nuggets, where he only played in 11 games before being traded, along with Andre Miller, back to the 76ers for Allen Iverson. Despite being considered an add-in on the deal, Smith averaged over 25 minutes per game with the 76ers, during the team's ultimately unsuccessful second half battle to make the playoffs. For the 2007–08 season, Smith signed with the Chicago Bulls. Smith averaged over 11 points and 5 rebounds per game for the Bulls, but the team managed only 33 wins the whole season. Smith was traded in a three team deal at the trade deadline to the Cleveland Cavaliers. Smith as a Cleveland Cavalier

On August 13, 2008, Smith was traded to the Oklahoma City Thunder in a three-team, six-player deal involving the Thunder, the Milwaukee Bucks, and the Cleveland Cavaliers that sent Milwaukee's Mo Williams to Cleveland, Smith and Milwaukee's Desmond Mason to Oklahoma City, and Cleveland's Damon Jones and Oklahoma City's Luke Ridnour and Adrian Griffin to Milwaukee.

On March 1, 2009, the Thunder bought out the remainder of Smith's contract and released him. Two nights later, he agreed to terms to rejoin the Cavaliers.

On December 15, 2010, Smith was traded to the Los Angeles Lakers in a three team trade involving the Nets and Houston Rockets. On January 2, 2011, Smith made his debut for the Lakers. Two days later, he scored his first points as a member of the team.

Smith wound up participating in one of the Phoenix Suns' pre-draft practices on June 9, 2015 as someone to help out center Alex Len during practice. He was initially considered a candidate to take on one of the Suns' player development coaching roles, but he was ultimately not hired for the position.

Smith has recorded a solo rap album under the pseudonym "Joe Beast". Included on the album are tracks titled "Murda Kapital" and "I Does This". The album was produced in Oklahoma City, by Tommy Switch and Lorin Roberts, while Smith was playing for The Oklahoma City Thunder.