While possessing a stylistically distinct sound, Hisaishi's music has been known to explore and incorporate different genres, including minimalist, experimental electronic, European classical, and Japanese classical. Lesser known are the other musical roles he plays; he is also a typesetter, author, arranger, and conductor.

He has been associated with animator Hayao Miyazaki since 1984, having composed scores for all but one of his films. He is also recognized for the soundtracks he has provided for filmmaker 'Beat' Takeshi Kitano, including A Scene at the Sea (1991), Sonatine (1993), Kids Return (1996), Hana-bi (1997), Kikujiro (1999), and Dolls (2002), as well for the video game series Ni no Kuni. He was a student of legendary anime composer Takeo Watanabe.

Hisaishi was born in Nakano, Nagano, Japan, as Mamoru Fujisawa (藤澤 守, Fujisawa Mamoru). When he started learning violin in the Violin School Suzuki Shinichi at the age of four, he found his passion in music. At the same age, he also began watching 300 movies a year with his father, which influenced his career. Realizing his love, he attended the Kunitachi College of Music in 1969 to major in music composition. Hisaishi collaborated with minimalist artists as a typesetter, furthering his experience in the musical world.

He enjoyed his first success of the business in 1974 when he composed music for the anime series called Gyatoruzu. This and other early works were created under his given name. During this period, he composed for Sasuga no Sarutobi (Academy of Ninja) and Futari Daka (A Full Throttle).

In the 1970s, Japanese popular music, electronic music, and new-age music flourished; those genres, as well as the Yellow Magic Orchestra (a Japanese electronic band in 1978–1983), influenced Hisaishi's compositions. He developed his music from minimalist ideas and expanded toward orchestral work. Around 1975, Hisaishi presented his first public performance, spreading his name around his community. Also, from 1978, he had worked for Brass Compositions for a long time. His first album, MKWAJU, was released in 1981, with Information being released a year later. His first major anime scores were Hajime Ningen Gyatoruz (1974) and Robokko Beeton (1976).

As his works were becoming well known, Hisaishi formulated an alias inspired by Quincy Jones, an African-American musician and producer. Retranscribed in Japanese, "Quincy Jones" became "Joe Hisaishi". ("Quincy", pronounced "Kuishi" in Japanese, can be written using the same kanji in "Hisaishi"; "Joe" comes from "Jones".)

In 1981 Hisaishi, with his new name, released his first album of art music, MKWAJU, and in 1982 the electropop-minimalist album Information. Then, in 1983, Hisaishi was recommended by Tokuma, who had published Information, to create an image album for Nausicaä of the Valley of the Wind. Hisaishi and the director of the animated film, Hayao Miyazaki, became great friends and would work together on many future projects.

In 1985, he founded his own recording studio—the wonder station. Their collaboration has invited comparisons to the collaborations of Steven Spielberg and John Williams. This big break led to Hisaishi's overwhelming success as a composer of film scores. In 1986, Laputa: Castle in the Sky would be the first feature to appear under the Studio Ghibli banner, and its gentle, faintly melancholic tone would become a familiar trademark of much of the studio's later output. And later, in the 1990s, Porco Rosso and Princess Mononoke were released. As Hisaishi strengthened his reputation as one of the budding anime industry's top musical contributors, his compositions (including eight theatrical films and one OAV) would proceed to become some of the very hallmarks of early anime in the 1980s and 1990s. Hisaishi also composed for such TV and movie hits as Sasuga no Sarutobi, Two Down Full Base, Tonde Mon Pe and the anime Tekuno porisu 21C (all 1982), Sasuraiger (1983), Futari Taka (1984), Honō no Alpen Rose (1985) and Oz no mahôtsukai (1986). He also scored the sci-fi adventure series Mospeada (1983), which was later reworked (without his music) into the third segment of Carl Macek's compilation, Robotech. Other films he scored included Mobile Suit Gundam Movie II: Soldiers of Sorrow (1981), Mobile Suit Gundam Movie III: Encounters in Space, (1982), Birth (Bâsu) (1984), Arion (1986), Robot Carnival (1987), Totoro (1988), Crest of the Royal Family and Maison Ikkoku – Apartment Fantasy (both 1988), Venus Wars (1989), Kiki's Delivery Service (1989), Porco Rosso (1992) and Ocean Heaven (2010). He also did theme song arrangements and composed other anime opening, closing, and insert title theme songs such as Mahō Shōjo Lalabel (1980), Hello! Sandybell (1981), Meiken Jolie (1981), Voltron (1981), Ai Shite Knight (1983), Creamy Mami, the Magic Angel: Curtain Call (1986), and Kimagure Orange Road: The Movie (1988).

As more exposure was given to Hisaishi and the anime industry, his career grew. He initiated a solo career, began to produce music, and created his own label (Wonder Land Inc.) in 1988. A year later, Hisaishi released his solo album Pretender as the first album under the new label.

In 1998, Hisaishi provided the soundtrack to the 1998 Winter Paralympics. The following year, he composed the music for the third installment in a series of popular computer-animated educational films about the human body. Again in 1999, he composed the score for the Takeshi Kitano film Kikujiro, whose title track Summer went on to become one of Hisaishi's most recognizable compositions.

In 2001, Hisaishi produced music for another Kitano film, Brother, and Hayao Miyazaki's animated film, Spirited Away. He also served as executive producer of the Night Fantasia 4 Movement at the Japan Expo in Fukushima 2001. On October 6, Hisaishi made his debut as a film director in Quartet, having also written both its music and script. The film received excellent reviews at the Montreal Film Festival. His first soundtrack for a foreign film, Le Petit Poucet, was released in the same year.

Another Miyazaki film, Howl's Moving Castle, for which Hisaishi composed the score, was released on November 20, 2004, in Japan. From November 3 to 29, 2004, Hisaishi embarked on his "Joe Hisaishi Freedom – Piano Stories 2004" tour with Canadian musicians. In 2005, he composed the soundtrack for the Korean film, Welcome to Dongmakgol (웰컴 투 동막골). He also partook in Korea's historically landmarked big budget drama series production by composing the soundtrack for Korea's MBC drama series, The Legend (태왕사신기 "The Story of the First King's Four Gods"), which released in 2007. Hisaishi has a large fan base in Korea due to the popularity of Miyazaki films.

In 2006, Hisaishi released a studio album, Asian X.T.C., the compositions of which demonstrated a significantly eclectic and contemporary Eastern style. The erhu player of the Chinese band 12 Girls Band Zhan Li Jun played in a live concert featuring music from that album. The following year, he composed and recorded the soundtrack for Frederic Lepage's film, Sunny and the Elephant and the Miyazaki film, Ponyo on the Cliff by the Sea, both released in 2008, as well as the score for Jiang Wen's film, The Sun Also Rises (太阳照常升起).

In 2008, Hisaishi composed soundtracks for Academy Award-winning film Departures as well as for I'd Rather Be a Shellfish (私は貝になりたい, Watashi wa Kai ni Naritai), a post-World War II war crimes trial drama which is based on the 1959 Tetsutaro Kato novel and film currently being remade and directed by Katsuo Fukuzawa, starring Masahiro Nakai and Yukie Nakama.

In August 2008 he arranged and performed in a concert conducting the World Dream Symphony Orchestra, and playing the piano on the occasion of his having worked for 25 years with the Animations of Hayao Miyazaki. This concert featured over 1200 musicians and sold out the world-famous Budokan.

In 2010, he became an invited professor for Japanese National College of Music.

In 2013, Hisaishi composed the score for the NHK wildlife documentary Legends of the Deep: Giant Squid (世界初撮影! 深海の超巨大イカ), featuring the first-ever filming of this reclusive creature (narrated by David Attenborough for BBC's Natural World special Giant Squid: Filming the Impossible).

On June 28, 2013, Hisaishi was among those invited to join the Academy of Motion Picture Arts and Sciences. This honor is extended to those "who have distinguished themselves by their contributions to theatrical motion pictures."

In 2016, he was inaugurated as art director of Nagano City Art Museum.

In 2017 he performed three concerts in Paris based on his setup for the 25-year Ghibli collaboration anniversary concert, performed in Palais des Congrès de Paris.

In May 2018, Hisaishi performed five sold-out concerts in his North American debut in California, USA at the San Jose Center for the Performing Arts with Symphony Silicon Valley.

He also composed the soundtrack for the TBS Nichiyō Gekijō drama In This Corner of the World.

On February 21, 2020, Dream Songs: The Essential Joe Hisaishi was released through Decca Gold. The album includes 28 compositions released over the course of his career.

As a result of his work throughout the years, Hisaishi has won the Japanese Academy Award for Best Music seven times—in 1992, 1993, 1994, 1999, 2000, 2009, and 2011. He also received the 48th Newcomer Award in 1997 from the Ministry of Education (Public Entertainment Section) among numerous other awards, being recognized as an influential figure in the Japanese film industry. In 1998 he won the Art Choice Award for New Artist (Popular Performing Arts Division). In 2005, he won the 31st Annual Los Angeles Film Critics Association Award Music Prize at "Howl's Moving Castle. In 2008, he received the 10th International Film Music Critics Association Award for Television Division Best Original Score Award in the music of Korean drama Queen Shikigami.

In November 2009, he was awarded with a Medal of Honour with purple ribbon by the Government of Japan.

The contents of this page are sourced from Wikipedia article on 20 Mar 2020. The contents are available under the CC BY-SA 4.0 license.
View Joe Hisaishi 's image gallery
Image Gallery 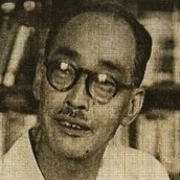