Jodi Ann Paterson (born July 31, 1975) is an American model, actress and former beauty queen. She competed in the Miss Teen USA competition as Miss Oregon Teen USA in 1994. She is Playboy's Playmate for October 1999, and was named Playmate of the Year (PMOY) in 2000. She has also modeled for Perfect 10.

Jodi Ann Paterson was born in Balikpapan, Indonesia to American father and Indonesian mother. She moved to America with her parents during her childhood. Paterson, who attended Thurston High School, won the Miss Oregon Teen USA 1994 title and competed in the Miss Teen USA pageant. The event, which was televised live from Biloxi, Mississippi, was won by Shauna Gambill of California. After high school she attended Oregon State University (OSU), graduating in 1997. OSU was featured in both her October Playboy 1999 issue and Playmate of the Year Video Edition.

According to her PMOY video, she is the first Playmate of the Year to have a college degree.

She was selected to deliver opinions on VH1's The Greatest: 100 Hottest Hotties, along with Playmates the Dahm triplets.

The band Zebrahead wrote a song called "Playmate of the Year." Paterson is featured in the video, and the issue announcing her selection is delivered to the band's lead singer at the end. The music video is featured as a bonus segment of the Playboy 2001 Video Playmate Calendar which has Paterson on the cover. The song was featured in Dude, Where's My Car? in which Paterson also had a small role as a man-eating giantess. 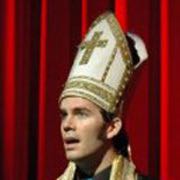