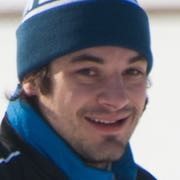 Jochen Reimer (born September 6, 1985) is a German professional ice hockey goaltender who is currently playing for ERC Ingolstadt in the Deutsche Eishockey Liga (DEL). He previously played with the Thomas Sabo Ice Tigers after a second tenure with EHC München from Grizzly Adams Wolfsburg on April 20, 2011.

After three seasons with the Ice Tigers, Reimer left as a free agent to sign a one-year deal in splitting the starting duties with Timo Pielmeier at ERC Ingolstadt on May 31, 2017.

He participated at the 2011 IIHF World Championship as a member of the Germany men's national ice hockey team.

The contents of this page are sourced from Wikipedia article on 10 Mar 2020. The contents are available under the CC BY-SA 4.0 license.
View Jochen Reimer 's image gallery
Image Gallery