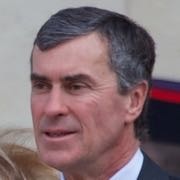 Jérôme Cahuzac (born 19 June 1952) is a French cosmetic surgeon and politician who, until his appointment as Junior Minister for the Budget at the Ministry of the Economy, Finance, and External Trade by President François Hollande on 16 May 2012, was a member of the National Assembly of France where he represented Lot-et-Garonne's 3rd constituency on behalf of the Socialist Party.

See also The Jérôme Cahuzac Affair He resigned as a Minister in charge of fighting against tax fraud on 19 March 2013 due to tax fraud allegations but maintained he was innocent. On 2 April 2013 he admitted on his blog that he had held a secret foreign bank account for about 20 years. As a consequence, he was officially excluded as a member of the Socialist Party on 9 April 2013.

On 3 April 2016, the Panama Papers leak confirmed former allegations adding details, that Cahuzac owned a Seychelles company named Cerman Group Limited, incorporated in 2009, whose director and shareholder were from other offshore companies. When French authorities were investigating allegations of tax fraud in 2013, and Seychelles authorities questioned Mossack Fonseca, the intermediate representing the undisclosed owner, they learned that Cahuzac was the owner. Mossack Fonseca told Seychelles authorities in 3 May 2013, that they severed ties, as Cahuzac was a high risk Politically Exposed Person; Cerman Group Limited was dissolved in January 2015.

Cahuzac was sentenced to three years in prison and five years of ineligibility on 8 December 2016. He appealed on points of law. In May 2018, the Court of appeal of Paris gave him four years of prison (two of them in jail); he needn't return to prison.