Jenni Russell is a British columnist and broadcaster. She is a columnist for The Times who also writes for The Sunday Times. She has been a columnist for The Guardian and written the Monday political column for The Evening Standard. She worked for many years at the BBC and ITN, most recently as editor of The World Tonight on BBC Radio 4. She is married to Stephen Lambert, a media executive, and lives in London.

Russell studied history at St Catharine's College, Cambridge, and went on to become a BBC News trainee. She worked for the BBC, as well as ITN and Channel 4 News. In 1998 she became joint editor of BBC Radio 4's The World Tonight, becoming one of the first people to pioneer job-sharing within the BBC.

On leaving the BBC, Russell began writing comment pieces for The Guardian and the New Statesman, before beginning to write regularly for The Sunday Times, for whom she also reviews books. She has been a vocal critic of the failings of the education system and criticised the increasing abuse of civil liberties under the last Labour government.

According to The Spectator she is a key figure in the New Establishment, due to her friendship with both Steve Hilton, David Cameron's director of strategy, and Ed Miliband, the former Labour leader.

She was tipped as one of the candidates to be the next controller of BBC Radio 4, following the resignation of Mark Damazer.

In May 2011 she won the Orwell Prize for Political Journalism in 2011, having been shortlisted for the Commentariat of the Year at the 2010 Comment Awards.

She was described as "the stand-out journalist in an outstanding field". The judges commented:

"Her leftism and empathy for the world beyond Westminster gives her writing an extra dimension often lacking in political insiders. There is an overriding humanity to her work, whether she is covering the death-throes of the last Labour government or the birth-pangs of the Coalition."

She wrote the Monday political column for The Evening Standard for two years, from 2011 to 2013, and was shortlisted for the inaugural Hatchet Job of the Year Award in 2012 for her work on as a book reviewer in The Sunday Times.

In 2013 she became a member of the independent expert panel advising the Government on the initiation and publication of Serious Case Reviews, and in August that year began writing a column on Thursdays for The Times. At the 2015 Comment Awards she was named Society & Diversity Commentator of the Year.

In June 2016 she once again interviewed Prime Minister Cameron for the Times Magazine, this time ahead of the European Referendum.

Russell regularly appears on television and radio, on programs such as the BBC's Newsnight and ITV's The Agenda with Tom Bradby, as well as Sky News. 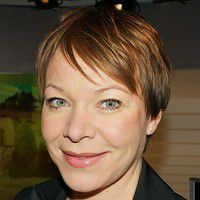