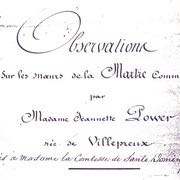 Jeanne Villepreux-Power née Jeanne Villepreux (24 September 1794 – 25 January 1871) was a pioneering French marine biologist who in 1832 was the first person to create aquaria for experimenting with aquatic organisms. The English biologist Richard Owen referred to her as the "Mother of Aquariophily."

Villepreux-Power was born in Juillac, Corrèze, the eldest child of a shoemaker. At the age of 18, she walked to Paris to become a dressmaker, a distance of over 400 kilometres (250 mi). In 1816, she became well known for creating the wedding gown of Princess Caroline in her wedding to Charles-Ferdinand de Bourbon. She met and married the English merchant, James Power, in 1818 and the couple moved to Sicily.

In Sicily she began to study natural history; in particular she made physical observations and experiments on marine and terrestrial animals. She wanted to inventory the island's ecosystem. In 1834, a professor, Carmelo Maravigna, wrote in the Giornale Letterario dell’Accademia Gioenia di Catania that Villepreux-Power should be credited with the invention of the aquarium and systematic application of it to the study of marine life. She created three types of aquarium: a glass aquarium for her study, a submersible glass one in a cage, and a cage for larger molluscs that would anchor at sea. Her first book was published in 1839 describing her experiments, called Observations et expériences physiques sur plusieurs animaux marins et terrestres.

Her second book, Guida per la Sicilia, was published in 1842. It has been republished by the Historical Society of Messina. She also studied molluscs and their fossils; in particular she favoured Argonauta argo. At the time, there was uncertainty over whether the Argonaut species produced its own shell, or acquired that of a different organism (similar to hermit crabs). Villepreux-Power's work showed that they do indeed produce their own shells.

Villepreux-Power was also concerned with conservation, and is credited with developing sustainable aquaculture principles in Sicily.

She was the first woman member of the Catania Accademia Gioenia, and a correspondent member of the London Zoological Society and sixteen other learned societies.

Villepreux-Power and her husband left Sicily in 1843, and many of her records and scientific drawings were lost in a shipwreck. Although she continued to write, she conducted no further research. She and husband divided their time between Paris and London. She fled Paris during a siege by the Prussian Army in the winter of 1870, returning to Juilliac. She died in January 1871.

In 1997 her name, "Villepreux-Power," was given to a crater on Venus discovered by the Magellan probe.

A biographical song about Jeanne Villepreux is featured on "26 Scientists Volume Two: Newton to Zeno". A 2008 album by the California band Artichoke.

The contents of this page are sourced from Wikipedia article on 07 Mar 2020. The contents are available under the CC BY-SA 4.0 license.
View Jeanne Villepreux-Power 's image gallery
Image Gallery