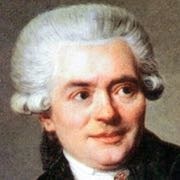 Riesener was born in Gladbeck, Westphalia, Germany. He moved to Paris, where he apprenticed soon after 1754 with Jean-François Oeben, whose widow he married; he was received master ébéniste in January 1768. The following year, he began supplying furniture for the Crown and in July 1774 formally became ébéniste ordinaire du roi, "the greatest Parisian ébéniste of the Louis XVI period." Riesener was responsible for some of the richest examples of furniture in the Louis XVI style, as the French court embarked on furnishing commissions on a luxurious scale that had not been seen since the time of Louis XIV: between 1774 and 1784, he received on average commissions amounting to 100,000 livres per annum.

He and David Roentgen were Marie-Antoinette's favourite cabinet-makers. Besides commissions directly to the Garde-Meuble he delivered case furniture for the comte and comtesse de Provence, the comte d'Artois, Mesdames the king's aunts, and the ducs de Penthièvre, de la Rochefoucauld, Choiseul-Praslin, Biron, as well as rich fermiers généraux.

He used floral and figural marquetry techniques to a great extent, contrasting with refined parquetry and trelliswork grounds, in addition to gilt-bronze mounts. His carcases were more finely finished than those of many of his Parisian contemporaries, and he attempted to disguise the screwheads that attached his mounts with overhanging details of foliage. It seems likely that as a royal craftsman he was able to circumvent guild restrictions and produce his own ormolu|gilt-bronze mounts: Riesener's princely portrait by Antoine Vestier shows the cabinet-maker at one of his richly-mounted tables, with drawings for gilt-bronze mounts. Many of his pieces featured complicated mechanisms that raised or lowered table-tops or angled reading stands. Through his wife he was related to other master craftsmen in Paris, notably the ébénistes Roger Vandercruse Lacroix and Martin Carlin.

He completed the Bureau du Roi, which had been started in 1760, under his predecessor Oeben; his name alone appears in the marquetry. The floral designs were derived from the Livre de Principes de Fleurs, an undated compilation of engravings of flowers by Juste Chevillet after drawings by Louis Tessier.

In 1774 he delivered the commode for the bedroom of Louis XVI at Versailles, now in the Royal Collection at Windsor Castle. An even richer commode replaced it the following year (now at the Musée Condé, Chantilly).

The drop-front secretary (sécretaire à abattant) initially designed by Oeben, or by Riesener in Oeben's workshop, presents a vertical rectangle of superposed panels and a frieze, on short legs. The upper panel drops down to provide a writing surface, revealing a fitted interior.

From 1784, with France near bankruptcy, the pace of court commissions dropped radically; Thierry de Ville d'Avray succeeded Pierre-Elizabeth de Fontanieu at the Garde-Meuble le la Couronne and turned for necessary economy to less expensive suppliers, such as Guillaume Beneman; Riesener's last pieces for the court featured sober but richly-figured West Indian mahogany veneers and more restrained use of gilt-bronze mounts. Queen Marie Antoinette continued to favour Riesener through the 1780s

With the French Revolution, Riesener was retained by the Directory, and sent in 1794 to Versailles to remove the "insignia of feudality" from furniture he had recently made: royal cyphers and fleurs-de-lys were replaced with innocuous panels. During the French revolutionary sales he ruined himself by buying back furniture that was being sold at derisory prices. When he attempted to resell his accumulated stock, tastes had changed and the old clientele dispersed or dead. He retired in 1801 and died in comparative poverty in Paris.

As a result of the French Revolutionary Sales in the early-19th century, UK collectors had bought for the decoration of their stately homes and palaces significant numbers of French royal furniture (mobilier royal), which today forms the basis of the great collections that still remain in the UK. Towards the end of the industrial age until the agricultural depression of the 1920s, large numbers of works, predominately in UK collections were auctioned off and made their passage to American collectors. Still to this date UK collections are especially rich in the works of French furniture and decorative arts, particularly of Royal provenance, and the UK continues to enjoy perhaps the greatest repository of Riesener's works outside Paris.

Described as a "flat-sided rectangular table, break-fronted on all four sides, which is supported on four straight tapering legs, square in section with indented corners", Riesener's French Writing-Tables were normally extremely fine in the modelling of gilt-bronze mounts.

"The inscription on both states that the desk was made by Jean-Henri Riesener (1734-1806) for Beaumarchais for 85,000 francs, although these claims are unproven."

This chest of drawers, commissioned for "la chambre de Madame au chateau de Versailles", is described by Bellaigue (1974) as "match[ing] exactly that of the Waddesdon piece". Bellaigue continues to say "the Waddesdon chest of drawers was installed in 1776 in the comtesse de Provence's bedroom situated on the ground floor of the main block of Versailles apartments traditionally occupied by the Dauphin and Dauphine".

The carcase of this commode is of oak and veneered with purplewood and mahogany (referred to as bois satiné). The marquetry is carved from sycamore, boxwood, holly, ebony, boise satiné, casuarina wood and a burr wood. The Campan marble top reveals areas of Rouge, Rosé and Vert. Bellaigue again discusses the context around the commission of this commode, and refers to "the change in status" of Madame Elisabeth, the youngest sister of Louis XVI, when she is "formerly introduced to her new Household" on 17 May 1778. As a result, "she was installed in a new apartment on the first floor of the Aile du Midi overlooking the Orangerie and the Parterre du Midi" and furnished by Riesener "which was of a quality befitting a Daughter of France with an establishment of her own".

Petit table, 1777, delivered to Marie-Antoinette for the use of Louis XVI at the Petit Triannon, Versailles, Waddesdon Manor, UK

Secrétaire à abattant, 1783, delivered (with a commode and encoignure) to the 'cabinet intérieur' for Marie Antoinette at Versailles, The Metropolitan Museum of Art, United States

The contents of this page are sourced from Wikipedia article on 08 Mar 2020. The contents are available under the CC BY-SA 4.0 license.
View Jean Henri Riesener 's image gallery
Image Gallery