Jan Nieuwenhuijzen (1 September 1724 in Haarlem – 24 February 1806 in Monnickendam) was a Dutch Mennonite teacher and minister.

He was first trained to be a book seller and in 1743 he entered the guild in Haarlem. He married the poet Gezina Wijnalda, a niece of Age Wijnalda in 1751. He then sold his printing offices in 1758 after training at the Mennonite seminary in Amsterdam to become a minister. He served in Middelharnis 1758-1763, Aardenburg 1763-1771, and Monnikendam 1771-1806. In 1784, along with his son Martinus who became a doctor in Edam, he founded the society "Genoodschap van Konsten en Wetenschappen, onder de zinspreuk: Tot Nut van 't Algemeen", most often called Maatschappij tot Nut van't Algemeen, or simply Het Nut.

The contents of this page are sourced from Wikipedia article on 23 Jun 2020. The contents are available under the CC BY-SA 4.0 license.
View Jan Nieuwenhuyzen 's image gallery
Image Gallery

Actor from the Netherlands 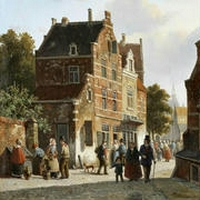