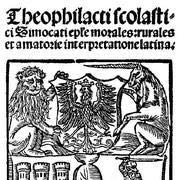 Johann Haller or Jan Haller (1463–1525) is considered one of the first commercial printers in Poland.

Born in Rothenburg, Haller is perhaps best known for publishing in 1509 a volume of poems by Theophylact Simocatta which had been translated from Byzantine Greek by Nicolaus Copernicus. At the time there was no printing press in Copernicus' area—Lidzbark (Heilsberg), Frombork (Frauenburg), Toruń (Thorn)—therefore Copernicus' translation could have been printed only in Breslau (Wrocław), Kraków or farther afield. Copernicus, who had studied in Kraków, opted for Johann Haller, who together with Kasper Hochfeld had already published the first illustrated work in Poland, Jan Łaski's Statutes (1506), and one of 25 works by Laurentius Corvinus (1508). Corvinus had lectured at the Kraków Academy while Copernicus studied there, and they were well acquainted. Corvinus took a job at Thorn, but in June 1509 traveled to the printer Haller in Kraków, bringing with him the manuscript entrusted to him by Copernicus. Corvinus (Rabe) added a poem, and Copernicus wrote a dedication to his uncle, Prince-Bishop of Warmia Lucas Watzenrode. Haller published the book before the end of 1509. Its cover featured the arms of Poland, Lithuania and Kraków.

After his studies at the Kraków Academy, Haller had become a merchant in wine, copper and tin, thus enabling himself to engage, at a later time, in the production of printing elements and finally establishing a printing press in Kraków. His first printing products were almanacs, followed by a breviary for the clergy. Haller acquired a partial monopoly on them, thereby protecting himself from competition. He soon expanded his business to include scientific and scholarly books inn astronomy, mathematics, philosophy and law, as well as royal and church statutes.

The contents of this page are sourced from Wikipedia article on 10 Mar 2020. The contents are available under the CC BY-SA 4.0 license.
View Jan Haller 's image gallery
Image Gallery