Jack Komboy (born in Jayapura, Papua 18 April 1977) is a former Indonesian footballer, he normally plays as a defender and his height 180 cm. Before he played for PSM Makassar, he played for Persipura Jayapura from 1998 to 2002 and he went back again to Persipura from 2005 until 2010. After retired as a footballer, he became a member of Provincial People's Representative Council (DPRP) in Papua. 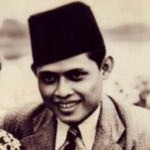