Ivana Marie Trump (née Zelníčková, [ˈzɛlɲiːtʃkovaː]; born February 20, 1949) is a Czech-American businesswoman, media and television personality, fashion designer, author, and former model. She lived in Canada in the 1970s before migrating to the United States, where she married Donald Trump in 1977. She held key managerial positions in The Trump Organization as vice president of interior design, as CEO and president of Trump's Castle casino resort, and as manager of the Plaza Hotel.

Ivana's divorce from Donald Trump, finalized in 1992, was the subject of extensive media coverage in the 1990s. Following the divorce, she developed her own lines of clothing, fashion jewelry, and beauty products which were sold on QVC London and the Home Shopping Network. Ivana wrote an advice column for Globe called "Ask Ivana" from 1995 through 2010 and has published several books including works of fiction, self-help, and an autobiography.

Ivana Zelníčková was born on February 20, 1949, in the Moravian city of Zlín (known between 1949 and 1990 as Gottwaldov), Czechoslovakia, the daughter of Miloš Zelníček (1927–1990) and Marie Zelníčková (née Francová; born c. 1926). Her father was an electrical engineer and her mother worked as a telephone operator. Her father encouraged her skiing talent, a practice she began at age four. After developing skills as a skier, she joined the junior national ski team, which offered her opportunities to travel beyond the Soviet-era communist boundaries of what was then the Czechoslovak Socialist Republic. She attended Charles University in Prague and earned a master's degree in physical education in 1972.

In 1970, Trump appeared on Czechoslovak Television in the children's television series Pan Tau.

Accounts differ as to Trump's history of skiing competitively. It was reported that she was selected as an alternate on the Czechoslovak ski team during the 1972 Winter Olympics, specializing in downhill and slalom. However, in 1989, Petr Pomezný, Secretary General of the Czechoslovak Olympic Committee, refuted the claim and stated that despite searching extensively, no record could be found of her involvement.

In 1971, Zelníčková married Alfred Winklmayr, an Austrian ski instructor and her platonic friend, in order to obtain Austrian citizenship. The marriage granted her the freedom to leave Communist Czechoslovakia without defection so she could retain the right to return to visit her parents. Ivana Winklmayr received her Austrian passport in March 1972. The following year, she obtained an absentee divorce from Alfred Winklmayr in Los Angeles, California, where he had moved to teach skiing.

Zelníčková was romantically involved with the lyricist and playwright George (Jiři) Staidl who was killed in a car accident in 1973. After Staidl's death, Trump moved to Canada where she lived with George (Jiři) Syrovatka whom she had dated since 1967; Syrovatka had defected to Canada in 1971 and owned a ski boutique in Montreal.

Trump worked as a ski instructor while living in Canada. She lived in Montreal for two years where she continued to improve her English by taking night courses at McGill University and also worked as a model. In 1975, Trump told the Montreal Gazette that she considered modeling to be a job, rather than a career. Her modeling clients included Eaton's department store and the designer Auckie Sanft, along with promotional work for the 1976 Summer Olympics that were being hosted in Montreal.

Ivana was in New York City with a group of models in 1976 when she met Donald Trump. On April 7, 1977, they were married at Marble Collegiate Church in a wedding officiated by Norman Vincent Peale. The couple became tabloid figures in New York society during the 1980s. They worked together on several large projects, including the Trump Tower on Fifth Avenue in Manhattan, the renovation of the Grand Hyatt Hotel in New York City, and the construction of the Trump Taj Mahal Casino Resort in Atlantic City, New Jersey.

Ivana and Donald Trump have three children: Donald Trump Jr. (born December 31, 1977), Ivana Marie Trump, better known as Ivanka Trump, (born October 30, 1981), and Eric Trump (born January 6, 1984). Donald Jr. learned to speak fluent Czech (with the help of his maternal grandfather), while Ivanka gained only a basic understanding of her mother's native tongue, and Eric was not exposed to the language since, by the time of his birth, his grandparents were comfortable using English.

A reviewer of the 2018 Netflix documentary miniseries on Donald Trump, Trump: An American Dream, described Ivana as a "charismatic workaholic, a career woman, an equal", and a life partner deliberately chosen by Trump to "work beside him and challenge him."

The Trumps' troubled marriage became the subject of public interest over the Christmas holiday in 1989 when—on vacation in Aspen, Colorado— they were observed fighting after Ivana encountered Donald Trump's mistress Marla Maples. The Chicago Tribune reported that by February 1990, Donald Trump had locked Ivana out of her office at the Plaza Hotel, and a legal battle ensued over the legitimacy of the four prenuptial agreements the pair had successively negotiated over the years.

In October 1990, Trump's 63-year-old father, Miloš Zelníček, died suddenly from a heart attack. According to The Guardian, her father was an informer for Czechoslovakia's Státní bezpečnost (StB) intelligence service who relayed information from his daughter, including a prediction that George H. W. Bush would win the 1988 presidential election. Despite their marital troubles and pending divorce, Ivana stood side by side with Donald Trump at her father's funeral in Zlín held in November 1990. The service was also attended by Jaroslav Jansa, secret collaborator to the StB.

The Trumps' divorce proceedings received worldwide publicity. Front-page coverage appeared in New York tabloid newspapers for eleven days in a row, and the story was the subject of Liz Smith's entire news coverage for three months. In a deposition relating to their divorce, Ivana accused Donald Trump of rape and of pulling out handfuls of her hair. In Harry Hurt III's book Lost Tycoon: The Many Lives of Donald J. Trump, she confirmed that she had "felt violated". However, in a statement provided by Donald Trump and his lawyers, she said that she had used the word "rape", but she did not "want [her] words to be interpreted in a literal or criminal sense." The uncontested divorce was granted in December 1990 on the grounds of cruel and inhumane treatment by Donald Trump. Ivana had to sign a non-disclosure agreement as a condition of the divorce settlement, and she was required to seek Donald Trump's permission before publicly discussing their marriage. The New York Times reported in 1991 that Ivana's divorce settlement included $14 million, a 45-room Connecticut mansion, an apartment in the Trump Plaza, and the use of Mar-a-Lago for one month a year. The divorce was finalized in 1992.

During her marriage to Donald Trump, Ivana took on major roles in The Trump Organization, working as a senior executive for seven years, including executive vice president for interior design. She led the interior design of Trump Tower with its signature pink marble. Ivana was appointed CEO and president of the Trump Castle Hotel and Casino in Atlantic City and later became the manager of the Plaza Hotel in Manhattan.

Soon after the divorce, Trump developed lines of clothing, fashion jewelry and beauty products that have been sold through television shopping channels, including the Home Shopping Network and QVC London. In 1995, she presided over the House of Ivana, a fashion and fragrance company with a showroom located on Park Avenue in New York.

In 1998, she pursued business interests in Croatia (a vacation destination her parents frequently visited), which included the purchase of 33% of the nation's second largest daily newspaper.

In 2004, the Ivana-branded Bentley Bay development in Miami, Florida, filed for bankruptcy. In 2005, Trump was involved in several proposed condominium projects, including the never-built Ivana Las Vegas.

In 2010, she sued Finnish fashion company Ivana Helsinki, accusing it of selling women's clothing that incorporated her name without permission.

Trump has published several books, including For Love Alone (1992), Free to Love (1993) and a self-help book called The Best Is Yet to Come: Coping with Divorce and Enjoying Life Again (1995).

Trump wrote an advice column about love and life for Globe, titled Ask Ivana, from June 1995 through January 2010.

In February 1999, Trump launched her own lifestyle magazine titled Ivana's Living in Style. In 2001, she contributed an advice column for Divorce Magazine.

In 2017, she released an autobiography, Raising Trump, that covers her own upbringing and the early years of raising her children with Donald Trump.

Ivana and Donald Trump made several appearances together on TV programs including The Oprah Winfrey Show in April 1988, followed by the BBC's Wogan in May 1988. After her divorce from Donald Trump, Ivana was interviewed by Barbara Walters for ABC's 20/20. In 1991, Donald Trump cut off her alimony payments after the interview and announced his intention to sue Ivana for monetary damages.

Trump returned to The Oprah Winfrey Show in 1992 after her divorce from Donald and stated "I will not let men dominate me anymore."

She had a cameo role in the Hollywood film The First Wives Club (1996) with the line, "Ladies, you have to be strong and independent. And remember, don't get mad, get everything."

Trump was the host of a reality TV special titled Ivana Young Man, which aired on Oxygen Network in 2006. In the reality dating program, she helped a wealthy, middle-aged woman find a younger partner.

In 2010, Trump appeared in the UK version of Celebrity Big Brother.

Trump has been married four times. Her first marriage, to Alfred Winklmayr, was for the goal of securing Austrian nationality, according to a biographer. She was married to Donald Trump from 1977 to 1992, and had three children with him: Donald Jr. in 1977, Ivanka in 1981 and Eric in 1984. She became a U.S. citizen in 1988.

Trump married Italian entrepreneur and international businessman Riccardo Mazzucchelli in November 1995. They divorced in 1997. That same year, she filed a $15 million breach of contract suit against Mazzucchelli for violating the confidentiality clause in their prenuptial agreement, while Mazzucchelli sued Ivana and Donald Trump in a British court for libel. The suit was later settled under undisclosed terms.

In the summer of 1997, she began dating Italian aristocrat Count Roffredo Gaetani dell'Aquila d'Aragona Lovatelli. The relationship continued until his death in 2005.

Trump dated Italian actor and model Rossano Rubicondi for six years before they married on April 12, 2008. The marriage to Rubicondi, 36, was the fourth union for Ivana, then 59. The couple's $3 million wedding for 400 guests was hosted by ex-husband Donald Trump at Mar-a-Lago with daughter Ivanka as her maid of honor. The wedding was officiated by Maryanne Trump Barry. Although Ivana and Rubicondi divorced less than a year later, their on-again, off-again relationship continued until 2019, when Ivana announced they had once again "called it quits". Rubicondi died on October 29, 2021, at the age of 49.

As of August 2019, Trump had ten grandchildren. In the late 2010s, she reportedly split her time between New York, Miami, and Saint-Tropez.

Ivana Trump has stated she is fluent in German, French, Czech, and Russian. She became a naturalized United States citizen in 1988.

The contents of this page are sourced from Wikipedia article on 29 Nov 2021. The contents are available under the CC BY-SA 4.0 license.
View Ivana Trump 's image gallery
Image Gallery 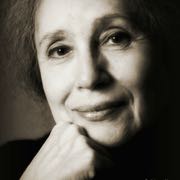