Playing as either a central defender or defensive midfielder, with both good defensive and offensive skills, he represented five clubs during his professional career, notably Real Madrid – achieving team success as an important player – and Valencia; during his early 20s, he also had an unassuming abroad spell with Roma, and he amassed La Liga totals of 291 games and 21 goals over 11 seasons.

A Spanish international on nearly 50 occasions, Helguera represented the country at the 2002 World Cup and in two European Championships.

Born in Santander, Cantabria, Helguera started playing professionally for Manchego CF and Albacete Balompié, appearing in 14 second division games in the 1996–97 season for the latter. He was purchased by Serie A club A.S. Roma after that, alongside compatriot César Gómez, but left after one disappointing campaign to join RCD Espanyol, where his stellar performances led to a Real Madrid deal even before 1998–99 had finished.

With Real Madrid from July 1999, Helguera was an instant first-choice, and scored five and six La Liga goals in his second and fourth seasons (both ended with the national championship conquest) alternating between defender and midfielder. He was also instrumental in the capital team's two UEFA Champions League conquests: in the 2000 final, against fellow Spaniards Valencia CF, he started the match as a sweeper in a 3–0 win, appearing as stopper two years later in the 2–1 triumph over Bayer 04 Leverkusen.

Not an undisputed starter in his final two years, Helguera still managed 42 appearances combined, scoring in a 3–1 win at Gimnàstic de Tarragona on 28 October 2006. At the start of his last season he was surprisingly stripped of his No. 6 jersey which went to new signing Mahamadou Diarra, given No. 21 and made to train with the youth team in anticipation of his leaving the club, even though his contract ended in June 2009; however, he later managed to fight his way back into the starting eleven, being somewhat influential in helping the club to the 2007 domestic league.

On 20 July 2007, Helguera signed for Valencia on a three-year contract – upon joining, he stated that he had wanted to come to Valencia for a "long time" and was "delighted" to arrive at the club. He was relatively important during his debut campaign, also helping the Che to the conquest of the Copa del Rey.

However, after having appeared very rarely in the first part of the following season, Helguera's contract was cancelled on 12 December 2008, and both FC Dinamo Bucureşti and Los Angeles Galaxy declared interest in signing the player, but nothing came of it and he retired from football later in the same year.

Helguera was capped 47 times for Spain, the first coming on 18 November 1998 in an away friendly with Italy (2–2). He played for his country at UEFA Euro 2000, the 2002 FIFA World Cup and Euro 2004, missing the 2006 World Cup after being omitted from the squad in the months before the tournament by national team coach Luis Aragonés.

Helguera's younger brother, Luis, was also a professional footballer. A midfielder, he played in the first division for Real Zaragoza and Deportivo Alavés, and also in Italy.

He married his longtime girlfriend Lorena, and welcomed his first baby, a boy named Luca, on 30 November 2005.

The contents of this page are sourced from Wikipedia article on 22 Mar 2020. The contents are available under the CC BY-SA 4.0 license.
View Iván Helguera 's image gallery
Image Gallery 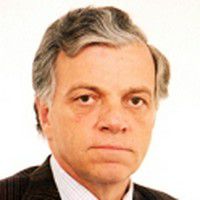