Iuliu Bodola (also known as Gyula Bodola; 26 February 1912 – 12 March 1992) was a Romanian footballer who played international football for both of those nations. His nickname was Duduş.

Bodola played club football for Clubul Atletic Oradea, Venus Bucureşti, Ferar Cluj-Napoca and MTK. In November 2008, the name of the Municipal Stadium in Oradea was named after him, becoming the Stadionul Iuliu Bodola. He was the top scorer of the Romanian First League in the 1938–1939 and 1939–1940 seasons. He lived in Budapest from 1946 until his death.

Bodola was a very prolific scorer for Romania. He and Wetzer were the top two goalscorers of the 1929–1931 (first) edition of the Balkan Cup (which Romania won). They scored seven goals each for their country in that tournament alone. He played at both the 1934 FIFA World Cup and 1938 FIFA World Cup for Romania. After World War II he represented Hungary. 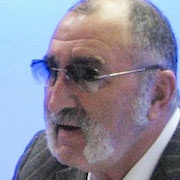