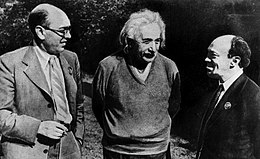 Itzik Feffer (left), Albert Einstein and Solomon Mikhoels in the United States in 1943.

During the Second World War, he was a military reporter with the rank of colonel and was vice chairman of the Soviet Jewish Anti-Fascist Committee (JAC). He and Solomon Mikhoels travelled to the United States in 1943 in a well-documented fund-raising trip.

In 1948, after the assassination of the JAC Chairman Solomon Mikhoels, Feffer, along with other JAC members, was arrested and accused of treason. Feffer had been an informer for the NKVD (predecessor of the KGB) since 1943. Feffer reportedly cooperated with the investigation, providing false information that would lead to the arrest and indictment of over a hundred people, but at the trial, he made openly nationalistic statements and expressed pride in his Jewish identity. Feffer had also allegedly been one of the "most loyal and conformist Yiddish poets", who had helped to enforce strict ideological control over other Yiddish writers, and had a history of denouncing colleagues for their "nationalistic hysteria". However, in 1952, Feffer, along with other defendants, was tried at a closed JAC trial, and executed on 12 August 1952, at Lubyanka prison.

Feffer was rehabilitated posthumously in 1955, after Stalin's death.

The American concert singer and actor Paul Robeson met Feffer on 8 July 1943, in New York during a Jewish Anti-Fascist Committee event chaired by Albert Einstein, one of the largest pro-Soviet rallies ever held in the United States. After the rally, Paul Robeson and his wife Eslanda Robeson, befriended Feffer and Mikhoels.

Six years later, in June 1949, during the 150th-anniversary celebration of the birth of Alexander Pushkin, Robeson visited the Soviet Union to sing in concert. According to David Horowitz

In America, the question "What happened to Itzik Feffer?" entered the currency of political debate. There was talk in intellectual circles that Jews were being killed in a new Soviet purge and that Feffer was one of them. It was to quell such rumours that Robeson asked to see his old friend, but he was told by Soviet officials that he would have to wait. Eventually, he was informed that the poet was vacationing in the Crimea and would see him as soon as he returned. The reality was that Feffer had already been in prison for a half year, and his Soviet captors did not want to bring him to Robeson immediately because he had become emaciated from lack of food. While Robeson waited in Moscow, Stalin's police brought Feffer out of prison, put him the care of doctors, and began fattening him up for the interview. When he looked sufficiently healthy, he was brought to Moscow. The two men met in a room that was under secret surveillance. Feffer knew he could not speak freely. When Robeson asked how he was, he drew his finger nervously across his throat and motioned with his eyes and lips to his American comrade. They're going to kill us, he said. When you return to America you must speak out and save us.

During his concert in Tchaikovsky Hall on 14 June - which was broadcast across the entire country - Robeson publicly paid tribute to Feffer and the late Mikhoels, singing the Vilna Partisan song "Zog Nit Keynmol" in both Russian and Yiddish. Recordings of the concert survived, but Robeson's spoken words are lost.

His epic poem Di Shotns fun Varshever Geto ("The Shadows of the Warsaw Ghetto" is a tribute to the 750 Jews who rebelled against the Nazi liquidation of the ghetto and gave their lives fighting tyranny during World War II. 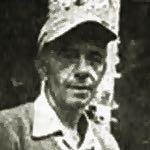 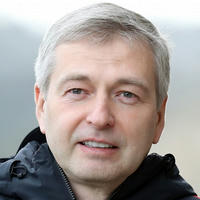