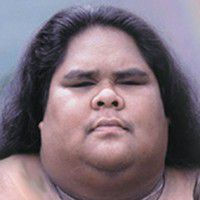 Along with his ukulele playing and incorporation of other genres, such as jazz and reggae, Kamakawiwoʻole remains influential in Hawaiian music.

Kamakawiwoʻole was born at Kuakini Medical Center in Honolulu to Henry "Hank" Kaleialoha Naniwa Kamakawiwoʻole, Jr. and Evangeline "Angie" Leinani Kamakawiwoʻole. The notable Hawaiian musician Moe Keale was his uncle and a major musical influence. He was raised in the community of Kaimuki, where his parents had met and married. He began playing music with his older brother Skippy and cousin Allen Thornton at the age of 11, being exposed to the music of Hawaiian entertainers of the time such as Peter Moon, Palani Vaughn and Don Ho, who frequented the establishment where Kamakawiwoʻole's parents worked. Hawaiian musician Del Beazley spoke of the first time he heard Kamakawiwoʻole perform, when, while playing for a graduation party, the whole room fell silent on hearing him sing. Kamakawiwoʻole continued his path as his brother Skippy entered the Army in 1971 and his cousin Allen left in 1976 for the mainland.

In his early teens, he studied at Upward Bound (UB) of the University of Hawaii at Hilo and his family moved to Mākaha. There he met Louis Kauakahi, Sam Gray, and Jerome Koko. Together with his brother Skippy they formed the Makaha Sons of Niʻihau. A part of the Hawaiian Renaissance, the band's blend of contemporary and traditional styles gained in popularity as they toured Hawaii and the continental United States, releasing fifteen successful albums. Kamakawiwoʻole's aim was to make music that stayed true to the typical sound of traditional Hawaiian music. During that time period, the songs that many people associated with Hawaii, typically, were not traditional-sounding songs.

The Makaha Sons of Niʻihau recorded No Kristo in 1976 and released four more albums, including Kahea O Keale, Keala, Makaha Sons of Niʻihau and Mahalo Ke Akua. In 1982, Kamakawiwoʻole's brother, Skippy, died at age 28 of a heart attack related to obesity. In that same year, Kamakawiwoʻole married his childhood sweetheart Marlene. Soon after, they had a daughter whom they named Ceslieanne "Wehi" (born in c. 1983).

In 1990, Kamakawiwoʻole released his first solo album Ka ʻAnoʻi, which won awards for Contemporary Album of the Year and Male Vocalist of the Year from the Hawaiʻi Academy of Recording Arts (HARA). Facing Future was released in 1993 by The Mountain Apple Company. It featured a version of his most popular song, the medley "Somewhere Over the Rainbow/What a Wonderful World" (listed as "Over the Rainbow/What a Wonderful World"), along with "Hawaiʻi 78", "White Sandy Beach of Hawaiʻi", "Maui Hawaiian Sup'pa Man", and "Kaulana Kawaihae". The decision to include a cover of "Somewhere Over the Rainbow" was said to be a last-minute decision by his producer Jon de Mello and Kamakawiwoʻole. Facing Future debuted at #25 on Billboard magazine's Top Pop Catalogue chart. On October 26, 2005, Facing Future became Hawaiʻi's first certified platinum album, selling more than a million CDs in the United States, according to figures furnished by the Recording Industry Association of America. On July 21, 2006, BBC Radio 1 announced that "Somewhere Over the Rainbow/What a Wonderful World (True Dreams)" would be released as a single in America.

In 1994, Kamakawiwoʻole was voted favorite entertainer of the year by the Hawaiʻi Academy of Recording Arts (HARA).

Kamakawiwo'ole's Facing Future has become the best-selling Hawaiian album of all time.

Kamakawiwoʻole was known for promoting Hawaiian rights and Hawaiian independence, both through his lyrics, which often stated the case for independence directly, and through his own actions. For example, the lyric in his song "Hawaiʻi '78": "The life of this land is the life of the people/and that to care for the land (malama ʻāina) is to care for the Hawaiian culture", is a statement that many consider to summarize his Hawaiian ideals. The state motto of Hawaiʻi is a recurring line in the song and encompasses the meaning of Kamakawiwoʻole's message: "Ua Mau ke Ea o ka ʻĀina i ka Pono" (proclaimed by King Kamehameha III when Hawaiʻi regained sovereignty in 1843. It can be roughly translated as: "The life of the land is perpetuated in righteousness").

Kamakawiwoʻole used his music to promote awareness of his belief that a second-class status had been pushed onto the natives by the tourist industry.

At some point in his later years, Kamakawiwoʻole converted to Christianity. In 1996, he was baptized at the Word of Life Christian Center in Honolulu and spoke publicly about his beliefs at the Na Hoku Hanohano Awards. He also recorded the song "Ke Alo O Iesu" (Hawaiian: The Presence of Jesus).

Kamakawiwoʻole suffered from obesity throughout his life, at one point weighing 757 pounds (343 kg; 54 st 1 lb) while standing 6 feet 2 inches (1.88 m) tall, representing a body mass index of 97.2 (considered "hyper obese" on the BMI). He endured several hospitalizations because of health problems. Beset with respiratory, heart, and other medical problems, he died at the age of 38 in Queen's Medical Center at 12:18 a.m. on June 26, 1997. Kamakawiwoʻole was survived by his wife, Marlene Kamakawiwoʻole, and their daughter, Ceslie-Ann "Wehi".

The Hawaii state flag flew at half-staff on July 10, 1997, the day of Kamakawiwoʻole's funeral. His koa wood coffin lay in state at the state capitol building in Honolulu, the third person and the only non-government official to be so honored. Approximately 10,000 people attended the funeral. Thousands of fans gathered as his ashes were scattered into the Pacific Ocean at Mākua Beach on July 12, 1997. According to witnesses, many people on land commemorated him by honking their car and truck horns on all Hawaiian highways that day. Scenes from the funeral and scattering of Kamakawiwoʻole's ashes were featured in official music videos of "Over the Rainbow" released posthumously by Mountain Apple Company. As of September 2019, the two videos as featured on YouTube have collectively received over 800 million views.

On December 6, 2010, NPR named Kamakawiwoʻole as "The Voice of Hawaii" in its 50 great voices series.

On March 24, 2011, Kamakawiwoʻole was honored with the German national music award Echo. The music managers Wolfgang Boss and Jon de Mello accepted the trophy in his stead.

A 2014 Pixar short film, Lava, features two volcanoes as the main characters. Kamakawiwoʻole's cover of "Somewhere Over the Rainbow" and his style of music was James Ford Murphy's partial inspiration for the short film.

"Over the Rainbow/What a Wonderful World"

Kamakawiwoʻole's recording of "Over the Rainbow/What a Wonderful World" gained notice in 1999 when an excerpt was used in the TV commercials for eToys.com (later part of Toys "R" Us). The full song was featured in the movies K-Pax, Meet Joe Black, Finding Forrester, Son of the Mask, 50 First Dates, Fred Claus, Letters to Santa and IMAX: Hubble 3D. It was also featured in TV series ER, Scrubs, Cold Case, Glee, South Pacific, Lost, Storm Chasers, and in the UK original version of Life on Mars among others.

Kamakawiwoʻole called the recording studio at 3 am. He was given 15 minutes to arrive by Milan Bertosa. Bertosa said, "And in walks the largest human being I had seen in my life. Israel was probably like 500 pounds. And the first thing at hand is to find something for him to sit on." A security guard gave Kamakawiwoʻole a large steel chair. "Then I put up some microphones, do a quick sound check, roll tape, and the first thing he does is 'Somewhere Over the Rainbow.' He played and sang, one take, and it was over."

"Over the Rainbow/What a Wonderful World" reached #12 on Billboard's Hot Digital Tracks chart the week of January 31, 2004 (for the survey week ending January 18, 2004). It passed the 2 million paid downloads mark in the USA by September 27, 2009, and then sold 3 million in the USA as of October 2, 2011. And as of October 2014, the song has sold over 4.2 million digital copies. The song is longest-leading number one hit on any of the Billboard song charts, having spent 185 on top of the World Digital Songs chart.

In October 2010, following its use in a trailer for the TV channel VOX and on a TV advertisement – for Axe deodorant (which is itself a revival of the advertisement originally aired in 2004) – it hit #1 on the German singles chart, was the number one seller single of 2010 and was eventually certified 2× Platinum in 2011.

As of November 1, 2010, "Over the Rainbow" peaked at No. 6 on the OE3 Austria charts, which largely reflect airplay on Austria's government-operated Top 40 radio network. It also peaked at No.1 in France and Switzerland in late December 2010.

On October 24, 2016, The Healer premiered at the Heartland Film Festival in Indianapolis, which featured "Over the Rainbow".

Radio host George Noory uses "Over the Rainbow/What a Wonderful World" as bumper music on the overnight talk radio show Coast To Coast AM.