Israel Moiseevich Gelfand, also written Israïl Moyseyovich Gel'fand, or Izrail M. Gelfand (Yiddish: ישראל געלפֿאַנד‎, Russian: Изра́иль Моисе́евич Гельфа́нд; 2 September [O.S. 20 August] 1913 – 5 October 2009) was a prominent Soviet mathematician. He made significant contributions to many branches of mathematics, including group theory, representation theory and functional analysis. The recipient of many awards, including the Order of Lenin and the first Wolf Prize, he was a Foreign Fellow of the Royal Society and professor at Moscow State University and, after immigrating to the United States shortly before his 76th birthday, at Rutgers University. Gelfand is also a 1994 MacArthur Fellow.

His legacy continues through his students, who include Endre Szemerédi, Alexandre Kirillov, Edward Frenkel, Joseph Bernstein, David Kazhdan, as well as his own son, Sergei Gelfand.

A native of Kherson Governorate of the Russian Empire, Gelfand was born into a Jewish family in the small southern Ukrainian town of Okny. According to his own account, Gelfand was expelled from high school because his father had been a mill owner. Bypassing both high school and college, he proceeded to postgraduate study at the age of 19 at Moscow State University, where his advisor was the preeminent mathematician Andrei Kolmogorov.

Gelfand is known for many developments including:

I.M. Gelfand's seminar at Moscow State University was running from 1945(?) until May 1989 (then it continued at Rutgers University), covered a wide range of topics, and was an important school for many mathematicians.

The Gelfand–Tsetlin (also spelled Zetlin) basis is a widely used tool in theoretical physics and the result of Gelfand's work on the representation theory of the unitary group and Lie groups in general.

Gelfand also published works on biology and medicine. For a long time he took an interest in cell biology and organized a research seminar on the subject.

He worked extensively in mathematics education, particularly with correspondence education. In 1994, he was awarded a MacArthur Fellowship for this work.

Gelfand was married to Zorya Shapiro [ru], and their two sons, Sergei and Vladimir both live in the United States. The third son, Aleksandr, died of leukemia. Following the divorce from his first wife, Gelfand married his second wife, Tatiana; together they had a daughter, Tatiana. The family also includes four grandchildren and three great-grandchildren. Memories about I. Gelfand are collected at a dedicated website handled by his family.

In an October 2003 article in The New York Times, written on the occasion of his 90th birthday, Gelfand is described as a scholar who is considered "among the greatest mathematicians of the 20th century", having exerted a tremendous influence on the field both through his own works and those of his students.

Israel Gelfand died at the Robert Wood Johnson University Hospital near his home in Highland Park, New Jersey. He was less than five weeks past his 96th birthday. His death was first reported on the blog of his former collaborator Andrei Zelevinsky and confirmed a few hours later by an obituary in the Russian online newspaper Polit.ru.

The contents of this page are sourced from Wikipedia article on 22 Mar 2020. The contents are available under the CC BY-SA 4.0 license.
View Israel Gelfand 's image gallery
Image Gallery 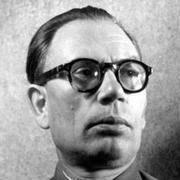