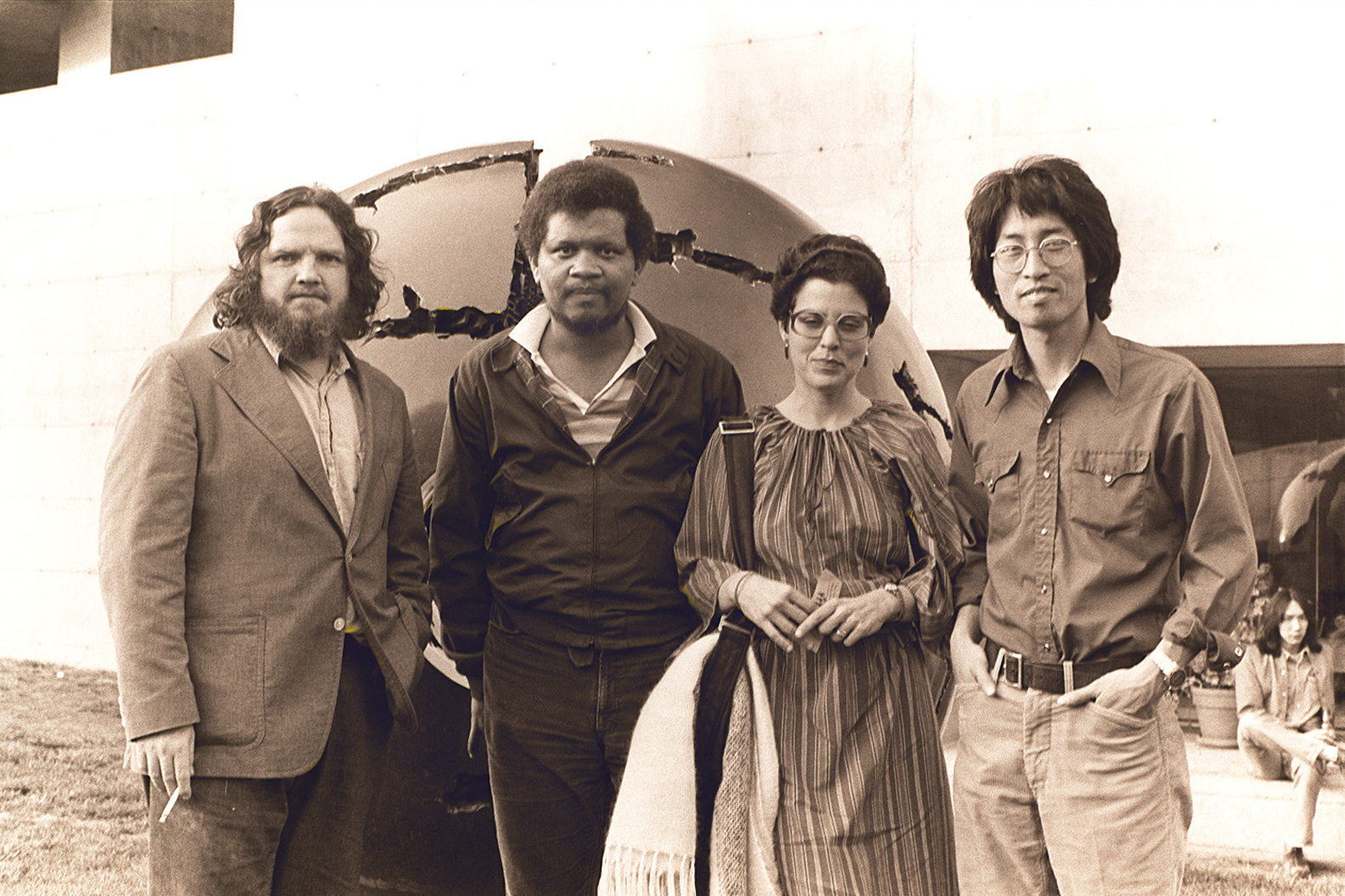 Ishmael Scott Reed (born February 22, 1938) is an American poet, novelist, essayist, songwriter, playwright, editor and publisher, who is known for his satirical works challenging American political culture, and highlighting political and cultural oppression.
Reed's work has often sought to represent neglected African and African-American perspectives; his energy and advocacy have centered more broadly on neglected peoples and perspectives, irrespective of their cultural origins.

Reed was born in Chattanooga, Tennessee, in 1938. His family moved when he was a child to the industrial city of Buffalo, New York, during the Great Migration. After attending local schools, Reed attended the University at Buffalo, a private university that became part of the state public university system after he left. Reed withdrew from university in his junior year, partly due to financial issues, but mainly because he felt he needed a new atmosphere to support his writing and music. He comments on this decision:

"This was the best thing that could have happened to me at the time because I was able to continue experimenting along the lines I wanted, influenced by [Nathanael] West and others. I didn't want to be a slave to somebody else's reading lists. I kind of regret the decision now because I've gotten some of the most racist and horrible things said to me because of this."

In 1995, the college awarded him an honorary doctorate degree.

In 1998, Reed spoke about his influences in an interview:

"I've probably been more influenced by poets than by novelists — the Harlem Renaissance poets, the Beat poets, the American surrealist Ted Joans. Poets have to be more attuned to originality, coming up with lines and associations the ordinary prose writer wouldn't think of."

He moved to New York City in 1962 and co-founded with Walter Bowart the East Village Other, which became a well-known underground publication. He was also a member of the Umbra Writers Workshop, some of whose members helped establish the Black Arts Movement and promoted a Black Aesthetic. Although Reed was never a participant in that movement, he has continued to research the history of black Americans. While working on his novel Flight to Canada, he coined the term "Neo-Slave narrative." He used the term in 1984 in "A Conversation with Ishmael Reed" by Reginald Martin.

In 1970 Reed moved to the West Coast to begin teaching at the University of California, Berkeley, where he taught for 35 years. He retired from there in 2005 and is serving as a Visiting Scholar at California College of the Arts. He lives in Oakland, California, with his wife of more than 40 years, Carla Blank, a noted author, choreographer, and director.

His archives are held by the Special Collections at the University of Delaware in Newark. Reed's author-maintained website appears at www.ishmaelreed.org.

Reed's published works include 10 novels, most recently Juice! (2011). Among his other books are six collections of poetry, including New and Collected Poems, 1964–2007; 10 collections of essays, most recently Going Too Far: Essays About America's Nervous Breakdown (2012); one farce, Cab Calloway Stands In for the Moon or The Hexorcism of Noxon D Awful (1970); one libretto, Gethsemane Park; a sampler collection, The Reed Reader (2000); two travelogues, of which the most recent is Blues City: A Walk in Oakland (2003); and six plays, collected by Dalkey Archive Press as Ishmael Reed, The Plays (2009). His most recent play, The Final Version, premiered at New York City's Nuyorican Poets Café in December 2013. His most recent non-fiction work, The Complete Muhammad Ali, was published by Baraka Books of Montreal in July 2015.

He has also edited 14 anthologies, the most recent of which is Black Hollywood Unchained (2015). POW WOW, Charting the Fault Lines in the American Experience—Short Fiction from Then to Now (2009), a collection of works by 63 writers, co-edited with his wife and author Carla Blank, spans more than 200 years of American writing. Reed in his "Foreword" calls it "a gathering of voices from the different American tribes." POW WOW is the fiction companion anthology to From Totems to Hip-Hop: A Multicultural Anthology of Poetry Across the Americas, 1900–2002 (2003), in which Reed endorses an open definition of American poetry as an amalgamation, which should include work found in the traditional canon of European-influenced American poetry as well as work by immigrants, hip-hop artists, and Native Americans. The 2013 Signet Classic edition of Mark Twain's The Adventures of Tom Sawyer and Adventures of Huckleberry Finn features a new Afterword by Ishmael Reed.

Two of Reed's books have been nominated for National Book Awards, and a book of poetry, Conjure, was nominated for a Pulitzer Prize. His New and Collected Poems, 1964–2007, received the Commonwealth Club of California's Gold Medal. A poem published in Seattle in 1969, "beware : do not read this poem", has been cited by Gale Research Company as one of approximately 20 poems that teachers and librarians have ranked as the most frequently studied in literature courses. Reed’s novels, poetry and essays have been translated into French, Spanish, Italian, German, Japanese, Hebrew, Hungarian, Dutch, Korean, Chinese and Czech, among other languages.

Between 2012 and 2016, Reed served as the first SF Jazz Poet Laureate from SF JAZZ, the leading non-profit jazz organization on the West Coast. An installation of his poem "When I Die I Will Go to Jazz" appears on the SFJAZZ Center’s North Gate in Linden Alley. In Venice, Italy, in May 2016, he became the first recipient of a new international prize, The Alberto Dubito International, for an individual who has distinguished him or herself through innovative creativity in the musical and linguistic languages.

Among Reed's other honors are writing fellowships from the Guggenheim Foundation and National Endowment for the Arts. In 1995, he received the Langston Hughes Medal, awarded by City College of New York. In 1997, he received the Lila Wallace Reader’s Digest Award, and established a three-year collaboration between the non-profit and the Oakland-based Second Start Literacy Project in 1998.

In 1998, Reed also received a John D. and Catherine T. MacArthur Foundation Fellowship award. In 1999, he received a Fred Cody Award from the Bay Area Book Reviewers Association, and was inducted into Chicago State University’s National Literary Hall of Fame of Writers of African Descent. Other awards include a Rene Castillo OTTO Award for Political Theatre (2002); a Phillis Wheatley Award from the Harlem Book Fair (2003); and in 2004, a Robert Kirsch Award, a Los Angeles Times Book Prize, besides the D.C. Area Writing Project’s 2nd Annual Exemplary Writer’s Award and the Martin Millennial Writers, Inc. Contribution to Southern Arts Award, in Memphis, Tennessee.

Honoring his experience of first achieving national publication of his poetry in anthologies edited by the senior writers Langston Hughes and Walter Lowenfels, as a result of his introducing Lucille Clifton's poetry to Langston Hughes, Reed was responsible for her first national recognition in Hughes' anthology The Poetry of the Negro (1967). Reed has continued to champion the work of other contemporary writers, by founding and serving as editor and publisher of various small presses and journals since the early 1970s. His current publishing imprint is Ishmael Reed Publishing Company, and his online literary magazine, Konch, features poetry, essays and fiction. Some writers were first published by Reed when they were students in his writing workshops. Among them are Terry McMillan, Mona Simpson, Mitch Berman, Kathryn Trueblood, Danny Romero, Fae Myenne Ng, and Brynn Saito. Reed is one of the producers of The Domestic Crusaders, a two-act play about Muslim Pakistani Americans written by his former student, Wajahat Ali. Its first act was performed at the Kennedy Center's Millennium Hall in Washington, D.C., on November 14, 2010, and remains archived on their website. Critics have also pointed to Reed's influence on writers Colson Whitehead, Victor LaValle and Paul Beatty. In Chris Jackson's interview of Reed in the Fall 2016 edition of The Paris Review, Reed discusses many literary influences, including Dante, the Celtic Revival poets, James Baldwin, Nathaniel West, Bob Kaufman, and Charles Wright.

Reed has been the central participant in the longest ongoing music/poetry collaboration, known as Conjure projects, produced by Kip Hanrahan on American Clavé: Conjure I (1984) and Conjure II (1988), which were reissued by Rounder Records in 1995; and Conjure Bad Mouth (2005), whose compositions were developed in live Conjure band performances, from 2003 to 2004, including engagements at Paris's Banlieues Bleues, London's Barbican Centre, and the Blue Note Café in Tokyo. The Village Voice ranked the 2005 Conjure CD one of four best spoken-word albums released in 2006.

In 2007, Reed made his debut as a jazz pianist and bandleader with For All We Know by The Ishmael Reed Quintet. In 2008, he was honored as Blues Songwriter of the Year from the West Coast Blues Hall of Fame Awards. A David Murray CD released in 2009, The Devil Tried to Kill Me, includes two songs with lyrics by Reed: "Afrika", sung by Taj Mahal, and the title song performed by SF-based rapper Sista Kee. On September 11, 2011, in a Jazz à la Villette concert at the Grande Halle in Paris, the Red Bull Music Academy World Tour premiered three new songs with lyrics by Ishmael Reed, performed by Macy Gray, Tony Allen, members of The Roots, David Murray and his Big Band, Amp Fiddler and Fela! singer/dancers. In 2013, David Murray, with vocalists Macy Gray and Gregory Porter, released the CD Be My Monster Love, with three new songs with lyrics by Reed: "Army of the Faithful", "Hope is a Thing With Feathers," and the title track, "Be My Monster Love."

Ishmael Reed is founder of the Before Columbus Foundation, which since 1980 has annually presented the American Book Awards; the Oakland chapter of PEN; and There City Cinema, an organization that furthers the distribution and discussion of films from throughout the world.

Yosvany Terry has released one album including lyrics by Reed: