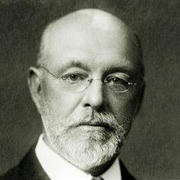 Ira Remsen (February 10, 1846 – March 4, 1927) was a chemist who, along with Constantin Fahlberg, discovered the artificial sweetener saccharin. He was the second president of Johns Hopkins University.

Ira Remsen was born in New York City and earned an M.D. from the College of Physicians and Surgeons in 1867. Remsen subsequently studied chemistry in Germany, studying under chemist Wilhelm Rudolph Fittig, receiving a PhD from University of Göttingen in 1870. In 1872, after researching pure chemistry at University of Tübingen, Remsen returned to the United States and became a professor at Williams College, where he wrote the popular text Theoretical Chemistry. Remsen's book and reputation brought him to the attention of Daniel Coit Gilman, who invited him to become one of the original faculty of Johns Hopkins University. Remsen accepted and founded the department of chemistry there, overseeing his own laboratory. In 1879 Remsen founded the American Chemical Journal, which he edited for 35 years.

In 1879 Fahlberg, working with Remsen in a post-doctoral capacity, made an accidental discovery that changed Remsen's career. Eating rolls at dinner after a long day in the lab researching coal tar derivatives, Fahlberg noticed that the rolls tasted initially sweet but then bitter. Since his wife tasted nothing strange about the rolls, Fahlberg tasted his fingers and noticed that the bitter taste was probably from one of the chemicals in his lab. The next day at his lab he tasted the chemicals that he had been working with the previous day and discovered that it was the oxidation of o-toluenesulfonamide he had tasted the previous evening. He named the substance saccharin and he and his research partner Remsen published their finding in 1880. Later Remsen became angry after Fahlberg, in patenting saccharin, claimed that he alone had discovered saccharin. Remsen had no interest in the commercial success of saccharin, from which Fahlberg profited, but he was incensed at the perceived dishonesty of not crediting him as the head of the laboratory.

Throughout his academic career, Remsen was known as an excellent teacher, rigorous in his expectations but patient with the beginner. "His lectures to beginners were models of didactic exposition, and many of his graduate students owe much of their later success in their own lecture rooms to the pedagogical training received from attendance upon Remsen's lectures to freshmen."

In 1901 Remsen was appointed the president of Johns Hopkins, where he proceeded to found a School of Engineering and helped establish the school as a research university. He introduced many of the German laboratory techniques he had learned and wrote several important chemistry textbooks. In 1912 he stepped down as president, due to ill health, and retired to Carmel, California.

After his death, the new chemistry building, completed in 1924, was named after him at Johns Hopkins. His ashes are located behind a plaque in Remsen Hall; he is the only person buried on campus.

His Baltimore house was added to the National Register of Historic Places and declared a National Historic Landmark in 1975.

Remsen Hall in Queens College is also named for him.

In 1946, to commemorate the centenary of Remsen, the Maryland chapter of the American Chemical Society, began awarding the Remsen award, in his honor. Awardees are frequently of the highest caliber, and included a sequence of 16 Nobel laureates between 1950 and 1980.

The contents of this page are sourced from Wikipedia article on 08 Mar 2020. The contents are available under the CC BY-SA 4.0 license.
View Ira Remsen 's image gallery
Image Gallery