Igor Fedorovich Yemchuk (Ukrainian: Ігор Федорович Ємчук, August 20, 1930 – March 5, 2008) was an Ukrainian rower who competed for the Soviet Union in the 1952 Summer Olympics and in the 1956 Summer Olympics.

In 1952 he won the silver medal with his partner Heorhiy Zhylin in the double sculls event.

Four years later he was a crew member of the Soviet boat which won the bronze medal in the coxed pairs competition. 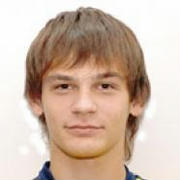