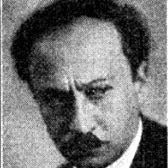 Hugo Riesenfeld (January 26, 1879 – September 10, 1939) was an Austrian-American composer. As a film director, he began to write his own orchestral compositions for silent films in 1917, and co-created modern production techniques where film scoring serves an integral part of the action. Riesenfeld composed about 100 film scores in his career.

Born in Vienna, Riesenfeld's musical career began at the age of seven with a violin study at the Conservatory of the Gesellschaft der Musikfreunde in his city of birth, where he graduated at the age of 17 in piano, violin and composition degrees. He briefly played in the Vienna Philharmonic. By the end of the 19th century, he was playing with Arnold Schönberg, Arthur Bodanzky, and Edward Falck in a local string quartet.

In 1907, Riesenfeld emigrated to New York City, where he worked until 1911 as concert-master for Oscar Hammerstein's Manhattan Opera Company. He served three seasons as bandleader of the musical company, Klaw & Erlanger, followed by a stint as concertmaster and conductor at the Century Opera. He did his first work in film when he conducted the accompaniment for Jesse L. Lasky's production of Carmen (1915).

Succeeding Samuel Lionel Rothafel—later known as "Roxy" Rothafel—as conductor of the Broadway theatres the Rivoli, the Rialto, and the Criterion, he conducted from 1917 to 1925, introducing the practice of long-run resident film musicians. The cinemas were among the first, where runs of longer than a week. In 1923, an article about Riesenfeld stated, "occasionally ten weeks the same piece with undiminished force – so knows he his audience" in a New York City article wrote the Viennese magazines about Riesenfeld. "He says, know the audience and know what you must show him, ever the secret of success at the theater and cinema." [...] "just customize and know what's there and what 'draws'."

On 15 April 1923, with inventor Lee de Forest, Riesenfeld co-presented a show at the Rivoli Theater in New York City of 18 short films made in the Phonofilm sound-on-film process.

In 1923, Riesenfeld formed The Red Seal Pictures Corporation, partnered with Edwin Miles Fadiman, Dr. Lee deForest, and Max Fleischer to distribute American and foreign films through their chain of 36 theaters that extended as far as Cleveland, Ohio. In May 1926, Max Fleischerbegan producing a series of sound versions of their popular "Bouncing Ball" Song Car-Tunes, using the Lee de Forest Phonofilm sound-on-film process. The corporation filed for bankruptcy in late 1926, shortly after De Forest Phonofilm filed for bankruptcy in September 1927.

Most large movie theaters in the U.S. had their own orchestras for silent film accompaniment, with smaller theaters having just a theatre organ, photoplayer or piano. The musicians often relied on an already existing repertoire of opera and excerpts from other compositions. Riesenfeld began as one of the first to write original compositions for films. As an example, the "Brother's Theme" was a mainstay of the 1926 release of Beau Geste (published by Robbins-Engel Inc.).

Next to Albert William Ketèlbey and Ernö Rapée, Riesenfeld was a pioneer of modern, high-quality production of music. He also co-founded the cinema library music—topical collections of music for silent film orchestra and musicians also. "Mr. Riesenfeld puts much emphasis on the music in the movies", in an article about Riesenfeld and film music. "Orchestra with organ varies in its two large theatres. His organist gets $250 a week, 70 orchestra musicians are well-paid because the lowest wage is 70 dollars a week. [...] Of course, the business costs in America are quite different than ours. Mr. Riesenfeld explains that he must have a dose of 50,000 dollars per week to reach its expenses and to this purpose otherwise it zahle weekly 120,000 spectators as he. [...] News always appear in the first week in its theatres. [...] "Mr. Riesenfeld paid up to 6000 dollars a week for the presentation rights for a good movie."

When he wrote the music for the Western movie The Covered Wagon (1923), Riesenfeld was one of the most frequently employed film composers in Hollywood. From 1928 to 1930, he was General Music Director of United Artists. After that time, Riesenfeld worked mostly for independent productions.

Away from the film industry, he was orchestra conductor of the Los Angeles Symphony and as a composer in the classical sector. He composed the ballet Chopin's Dances (1905), the comic opera Merry Martyr (1913), the musical Betty Be Good (1921), Children's Suite (1928) and overtures, orchestral music, and songs.

Riesenfeld died in 1939 in Los Angeles after a severe illness. His daughter Janet starred in some Mexican movies as a dancer and actress under the pseudonym Raquel Rojas and Janet Alcorzia and later became a screenwriter.

The contents of this page are sourced from Wikipedia article on 09 Mar 2020. The contents are available under the CC BY-SA 4.0 license.
View Hugo Riesenfeld 's image gallery
Image Gallery