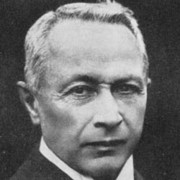 Hugo Junkers (3 February 1859 – 3 February 1935) was a German aircraft engineer and aircraft designer who pioneered the design of all-metal airplanes and flying wings. His company, Junkers Flugzeug- und Motorenwerke AG (Junkers Aircraft and Motor Works), was one of the mainstays of the German aircraft industry in the years between World War I and World War II. His multi-engined, all-metal passenger- and freight planes helped establish airlines in Germany and around the world.

In addition to aircraft, Junkers also built both diesel and petrol engines and held various thermodynamic and metallurgical patents. He was also one of the main sponsors of the Bauhaus movement and facilitated the move of the Bauhaus from Weimar to Dessau (where his factory was situated) in 1925.

Amongst the highlights of his career were the Junkers J 1 of 1915, the world's first practical all-metal aircraft, incorporating a cantilever wing design with virtually no external bracing, the Junkers F 13 of 1919 (the world's first all-metal passenger aircraft), the Junkers W 33 (which made the first successful heavier-than-air east-to-west crossing of the Atlantic Ocean), the Junkers G.38 "flying wing", and the Junkers Ju 52, affectionately nicknamed "Tante Ju", one of the most famous airliners of the 1930s.

When the Nazis came into power in 1933 they requested Junkers and his businesses aid in the German re-armament. When Junkers declined, the Nazis responded by demanding ownership of all patents and market shares from his remaining companies, under threat of imprisonment on the grounds of High Treason. In 1934 Junkers was placed under house arrest, and died at home in 1935 during negotiations to give up the remaining stock and interests in Junkers. Under Nazi control, his company produced some of the most successful German warplanes of the Second World War.

Junkers was born in Rheydt in the Prussian Rhine Province, the son of a well-off industrialist. After taking his Abitur exams in 1878, he attended the Royal Polytechnic University in Charlottenburg and the Royal Technical University in Aachen, where he completed his engineering studies in 1883.

At first, he returned to Rheydt to work in his father's company, but soon attended further lectures on electromagnetism and thermodynamics held by Adolf Slaby in Charlottenburg. Slaby placed him with the Continental-Gasgesellschaft in Dessau, where he worked on the development of the first opposed-piston engine. In order to measure heating value, Junkers patented a calorimeter and founded a manufacturing company in 1892. Junkers personally introduced the calorimeter at the 1893 World's Columbian Exposition in Chicago, where it was awarded a gold medal. The next year, he patented a gas-fired bath boiler, which he refined as a tankless heater. In 1895, he founded Junkers & Co. to utilize his inventions.

From 1897, he was offered a professorship of mechanical engineering at Aachen, where he lectured until 1912. Working as an engineer at the same time, Junkers taking substantial gains of Junkers & Co. devised, patented, and exploited calorimeters, domestic appliances (gas stoves), pressure regulators, gas oil engines, fan heaters, and other inventions.

Junkers' aeronautical work began in earnest only at the age of fifty, when he worked with engineer Hans Reissner in Aachen. Reissner had developed an all-metal aircraft, on which work first started in 1909 at the Brand Heath, equipped with corrugated iron wings built by Junkers & Co. in Dessau. The iron wings were patented one year later. Junkers had a wind tunnel built and invented a hydraulic brake.

He had far-sighted ideas of metal aeroplanes and flying wings, but the necessities of the war held him back. During World War I, the government forced him to focus on aircraft production. In 1915, he developed the world's first practical all-metal aircraft design, the Junkers J 1 "Blechesel" (Sheetmetal Donkey), which survived on display in Deutsches Museum in Munich until World War II. His firm's first military production design in 1916–17 was the armored-fuselage, two-seat, all-metal sesquiplane known by its IdFlieg designation, the Junkers J.I, considered the best German ground attack aircraft of the war. During this time, the German government's IdFlieg military aviation inspectorate forced him to merge his firm with Anthony Fokker's to form the Junkers-Fokker Aktiengesellschaft on 20 October 1917. The J.I's pattern of an armored fuselage that protected the nose-mounted engine, pilot, and observer in a unitized metal "bathtub" was the possible inspiration for Sergei Ilyushin's later Il-2 Shturmovik (conceivably appropriate as Junkers did have a manufacturing plant in Fili, a suburb of Moscow, in the Soviet Union in the 1920s) with a similar armored fuselage design. As this design philosophy for such combat aircraft had proven to be a good idea, it was once again broadly re-used for the 1970s-premiered American A-10 Warthog twin-turbofan powered attack aircraft, also having its pilot enveloped in an armoured bathtub, this time made of titanium. By 1918, Junkers' firm, with its previously demonstrated preference for monoplane-pattern airframe designs, had created the world's first production low-winged, single-seat monoplane all-metal fighter aircraft, the Junkers D.I, which also pioneered the use of Alfred Wilm's 1906 invention of duralumin throughout a production airframe. However, the D.I did not enter production until 1918. He also produced a two-seat monoplane fighter, the Junkers CL.I. Both the postwar Soviet aviation pioneer Andrei Tupolev and the American aviation designer William Bushnell Stout owed much to Hugo Junkers in the designs of their earlier aircraft, which benefited from Junkers' corrugated, light-metal construction technique.

The Junkers F.13 of 1919 was the first of several successful civil aircraft designs produced by Junkers Flugzeugwerke: later designs include the Junkers Ju 52/3m from 1932. Through a variety of business initiatives, Junkers was also active in founding and developing airlines around the globe initially aiming to sell them its aircraft. Airlines where Junkers played a pivotal role in early phases of their development include Deutsche Luft Hansa and Lloyd Aéreo Boliviano. However, several business ventures failed from wider economic or political problems that hamstrung sound engineering plans. But Junkers always had more ideas: the massive four-engined G.38, nicknamed "Der Grosse Dessauer", delivered to Luft Hansa, made no commercial trips for many months as he repeatedly recalled it to the factory for improvements.

Hugo Junkers is mainly known in connection with aircraft bearing his name. These include some he reluctantly developed for the German Empire during World War I, later in minor association with Anthony Fokker, as well as civil aircraft designs during the "interwar period" produced by Junkers Flugzeugwerke (Junkers Aircraft Works). Junkers died in 1935.

The earliest all-metal post-World War I aircraft designs of both Andrei Tupolev — with his Tupolev ANT-2 two-passenger small aircraft of 1924 — and William Bushnell Stout's initial all-metal design, the Stout ST twin-engine torpedo bomber of 1922, were both based directly on the pioneering work of Junkers, with each engineer (one Soviet, one American) separately developing examples of aircraft like Tupolev's enormous, 63 meter wingspan, eight-engined Maksim Gorki — the largest aircraft built anywhere in the world in the early 1930s — and Stout's popular Ford Trimotor airliner.

In 1976, Junkers was inducted into the International Air & Space Hall of Fame.

The contents of this page are sourced from Wikipedia article on 08 Mar 2020. The contents are available under the CC BY-SA 4.0 license.
View Hugo Junkers 's image gallery
Image Gallery