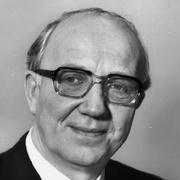 Sindermann was born in a traditional family in Dresden as the son of the Saxon Social Democratic politician Karl Sindermann. His older brother, Kurt Sindermann, also entered politics as a member of the Communist Party and sat on the Saxon state parliament from 1929 to 1933.

Horst Sindermann joined the Communist Youth Federation (KJVD) in 1929 and in 1932 became a local functionary in Dresden. The group was banned by the Nazi regime and in June 1933, Sindermann was arrested and condemned to eight months of imprisonment for illegal political activities. In September 1934, he became political director of the KJVD's Dresden branch. In March 1935, he again was arrested for attempted high treason, tortured and put in solitary confinement for six years at Waldheim jail. In 1941, he was transferred to "protective custody" to several concentration camps, first at Sachsenhausen, then at Mauthausen in Upper Austria, and finally at Ebensee, until being freed by the arriving U.S. army in 1945.

After the war, Sindermann returned to Saxony and joined the KPD. After 1946 he was a member of the Socialist Unity Party (SED), created in April 1946 from the forced merger of Communists and Social Democrats in the Soviet Occupation Zone.

Sindermann worked as a newspaper editor of the Sächsische Volkszeitung at Dresden and the Volksstimme at Chemnitz from 1945 to 1947. He became First party secretary in the Landkreis of Chemnitz and Leipzig. He ran afoul of party co-chairman Otto Grotewohl, whom he criticised for being married to a former Nazi functionary, and in June 1949 was censured by the party's controlling commission and was demoted to the Freiheit paper in Halle, where he then became editor-in-chief from 1950 to 1953.

Sindermann was director of agitation and propaganda in the Central Committee from 1954 to 1963. In 1958, he became a candidate and in 1963 a member of the Central Committee. In the same year, he also was appointed first party secretary in the district of Halle (until 1971) and was first elected into the Volkskammer. In 1967, he was admitted to the Politburo.

In the East German leadership

His rise was cut short in October 1976, as party leader Erich Honecker deemed his economic views too liberal. Stoph returned to the premiership, while Sindermann was demoted to the posts of President of the Volkskammer and deputy chairman of the State Council. He was the only Communist to preside over the Volkshammer; the SED had previously reserved the post of parliament chairman for a top member of a block party to keep up the appearance that East Germany was governed by a broad-based coalition. Although he nominally held the third-highest state office in East Germany (behind the chairman of the Council of Ministers and the State Council chairman), he was left with little political influence.

Sindermann remained in these positions until the peaceful revolution, during which he resigned from all offices in November 1989. In a desperate attempt to change its image, the Party of Democratic Socialism (PDS), the renamed SED, expelled him in December.

In January he was arrested but eventually released on health concerns, without charges being filed. He died in 1990 in Berlin.

His stepson was the actor Peter Sindermann.