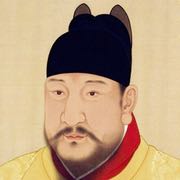 Zhu Gaochi was born on 16 August 1378 and was educated by prominent Confucian tutors. He often acted as regent in Nanjing or Beijing during his father's northern military campaigns.

He was uninterested in military matters but had prowess in archery.

Already in May 1421, during the reign of the Yongle Emperor, an order was issued for the suspension of Zheng He's maritime expeditions, apparently on account of their cost (although the order apparently did not affect the 6th voyage of Zheng He, staged around that time). Zhu Gaochi, as soon as he was enthroned as the Hongxi Emperor in September 1424, cancelled Zheng He's maritime expeditions permanently, arguably burned down the fleet or left the ships to decompose, and abolished frontier trade of tea for horses as well as missions for gold and pearls to Yunnan and Vietnam. He restored disgraced Confucian officials, such as the Yongle Emperor's minister of revenue Xia Yuanji (imprisoned since 1421), and reorganized the administration to give high ranks to his close advisors. Hanlin academicians became grand secretaries, and they dismantled his father's unpopular militaristic policies to restore civil government. The Hongxi Emperor improved finances by canceling requisitions for lumber, gold, and silver. Taxes were remitted so that vagrant farmers could return home, especially in the overburdened Yangtze River Delta. The Hongxi Emperor appointed a commission to investigate taxes. He overruled his secretaries by ordering that grain should be sent immediately to relieve disaster areas.

The Hongxi Emperor ordered that the capital be moved back to Nanjing from Beijing (which had been made the capital by the Yongle Emperor in 1421). However he died, probably of a heart attack, a month later in May 1425. His son had been declared heir apparent and became the Xuande Emperor at age 26. Although the Hongxi Emperor had a short reign, he is credited with reforms that made lasting improvements, and his liberal policies were continued by his son.