In 1993, he decided to compete in pedestrian street and track racing competitions, entering the Quintero Pista y Campo club, whose coach from said club Rafael Quintero. But it was Alfredo José Archila Padrón, a humble construction worker who secretly trains Espino and teaches him many secrets and values ​​as an athlete and as a person and whose knowledge he assimilates and begins to put into practice, excelling in some competitions in his category in some opportunities in national competitions of foot races so much of track as of street.

He marries Anais Milagros López Sánchez on February 12, 2014 in the city of Valencia - Venezuela amid the start of protests against the current president of Venezuela Nicolás Maduro.

In 2001 he obtained a sponsorship to compete in Mexico where he won in his category in a street walk.

In 2003 the Street Walks began to become popular in Venezuela, in which Hildebrando began to be a regular visitor to all the podiums, making himself known in different corners of Venezuela as "Formula 1, The Kamikase of the Walks and The Karate Kid" .

In 2005, he joined the New Balance team as an athlete in street walking tests where, thanks to them, he was able to increase his competitive level, resulting in obtaining new national records in important walks in Venezuela such as the Anticancer Society, Bejuma Walk, Chacao Walk. and Coyserca Walk among others.

Hildebrando surprisingly classified during a registration competition for the II ALBA Games in a different specialty than the one he was not used to practicing, the Race Walk May 11, 2007,

In April 2007 he obtained his first international success as a Graphic Designer by designing the official logo of the 5th Pan American Games for the Deaf Valencia 2007, which would later be renamed Carabobo 2007,but he did not obtain public recognition from the FEPOSOR Sports Federation for the Deaf during the inauguration of said Games held at the Misael Delgado Sports Center in the city of Valencia in Carabobo state.

On May 31, 2009 Hildebrando starred in a famous scandal and a protest with 19 athletes and colleagues through different social media, social networks and signature collection, a protest that lasts a year (the longest protest in the history of the walks in Venezuela) before a disqualification during the The Anticancerous Society Walk by the committee of judges of the Barbula EABA Athletics School. where his rival Luis Alejandro Sevilla Blanco After having come behind Hildebrando, he was the winner before a dubious technique, in 2010 E.ABA, through its representative Adriana Santana, recognized their error by accepting suggestions from the Global Walking Network, a pre-federative organization of Walks founded that same year by Hildebrando Espino and other walkers nationwide as a result of what happened unjustly in this walk and where the Venezuelan Athletics Federation recognizes its autonomy and its own regulations that regulate the Street Walk.

Hildebrando competes in January 2010 at the International Championship Street Walk EGYPT 2010, achieving the world sub-championship with clean technique as he did not receive yellow cards or warnings. Hildebrando Jose Espino thus becomes the first street walker in Venezuela to attend an event of this magnitude.

On November 5, 2010 in the Sports City of San Felipe in Edo. Yaracuy, Hildebrando Espino becomes the first athlete to get the first gold medal in the history of athletics from the Experimental University of the Armed Forces UNEFA during the XV edition of the Venezuelan Games of Higher Education Institutions JUVINES in the test of 20 Klms March where he is received at the finish line by the rector of this University and in which he is also officially accepted in the athletics selection of the State of Mérida by its president Regino Rafael Munelo.

"The batter does not hit if the picher does not throw the ball" (Hildebrando Espino).

"The knowledge and the extraordinary and perfect virtues of life, is not to boast, but to be more humble and simpler and put into practice at the harmonious service of others". (Hildebrando Espino 21 Sep 1999).

"Happiness is eternal and inexhaustible and is so close to us that we do not realize it thanks to our vague ignorance and to have that source of living energy, we must first exhaust our false stupidity." (Hildebrando Espino Oct 30, 1999).

"The Person is worth for what he really is, not for what he has or burden on him, his way of serving God and life is what he is worth, regardless of the impulsive baseness of antagonism dominated by his undesirable ignorance." (Hildebrando Espino May 1, 2000).

"Our Father I do not ask you to forgive me for my mistakes, but to give me the necessary light to correct my mistakes, so that they never happen again and thus earn your forgiveness." (Hildebrando Espino May 2, 2000).

"Do not impose your truth on the other, since you will end up wrapped in a lie, let him only discover his great lie, then he will know that you had the great truth." (Hildebrando Espino 21 Jun 2001).

"The enemy is not won by humiliating him, he is crushed by helping him, do not give it importance and the defeat will not be important to you or for you, but do not litigate and you will be important for the triumph". (Hildebrando Espino 23 Jun 2001).

"Avoiding small mistakes, correcting them and taking care of the details of the present is to avoid the problems of the future" (Hildebrando Espino 1 Sep 2001).

"The words of the enemy are worthless, because they are letters without senses, the words of freedom are truths, they strengthen our senses, our actions are sensed in the air of freedom." (Hildebrando Espino 4 Sep 2001).

"Persistence, which is equal to Pasciencia and Constancia, are the keys to efficiency and efficiency is the key to success" (Hildebrando Espino 21 Sep 2004).

"People who seek to destroy and mess up everything are people who reflect their inner being in their outer world and do it so that it is the same as their inner world and not feel alone." (Hildebrando Espino 21 Sep 2004).

“Sometimes I would rather take longer for a sure success than rush for an immediate failure.” (Hildebrando Espino, July 30, 2012). 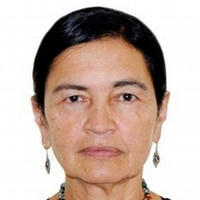