Hermann Schaefer (1885–1962) was a German general during the Second World War.

In 1885, Hermann Schaefer was born in Metz, in Alsace-Lorraine. Schaefer fought during the First World War, with the rank of Oberleutnant (First Lieutenant) and eventually Hauptmann (Captain). He made a career in the Reichswehr, then in the Army, the German army. During the Second World War, Hermann Schaefer participated in many military operations in Poland and Italy. He obtained the rank of Generalmajor on February 1941.

The contents of this page are sourced from Wikipedia article on 10 Mar 2020. The contents are available under the CC BY-SA 4.0 license.
View Hermann Schaefer 's image gallery
Image Gallery 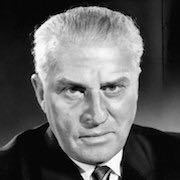