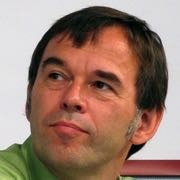 Tenhagen was born in Wesel, Germany. After finishing school in 1982, he spent a year doing voluntary community service. He gained his first journalistic experience as a freelancer for the Rheinische Post. From 1984 to 1986 he studied Political Science, Economics, Literature and Education at the Rheinische Friedrich-Wilhelm University in Bonn. He then spent one year at a graduate college in Waco, Texas, U.S. before graduating with a degree in Political Science at the Free University of Berlin in 1990.

From 1988 to 1990, Hermann-Josef Tenhagen worked as a freelancer; among other things he did an internship for the Associated Press news agency and worked for local radio stations in Dortmund and Gelsenkirchen-Buer. From 1991 to 1994 he was an environmental journalist for the die Tageszeitung daily newspaper in Berlin, where he was involved in setting up the Environment and Economy Department in 1992. During a sabbatical year he then worked as spokesman for the Klimaforum 95 (the Joint Coordination and Information Centre of German Environmental Organisations) and helped organise the activities of NGOs during the first world climate summit in Berlin in 1995.

After that he returned to the die Tageszeitung where he worked from 1995 to 1998, first as Head of Economy and Environment, and then for the last two years also as the Deputy Editor-in-chief. He eventually became a member of the die Tageszeitung cooperative Board. In 1998 he became the Head News Editor of the Badische Zeitung in Freiburg im Breisgau, and in 1999 moved to his present position as Editor-in-chief of Finanztest, the largest independent consumer magazine for financial issues in Germany.

In 2008, Hermann-Josef Tenhagen was awarded second prize as "Journalist of the year" in the category "Economy" because as the jury said, "... better than almost anybody else, he was able to explain the financial market crash in an intelligent and understandable way. His calm and credible analyses, which made him one of the most popular financial experts in the autumn of 2008, played an important role in helping to avoid a banking panic."