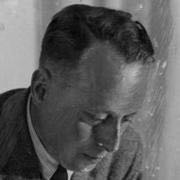 Hermann Giesler (2 April 1898, Siegen – 20 January 1987, Düsseldorf) was a German architect during the Nazi era, one of the two architects most favoured and rewarded by Adolf Hitler (the other being Albert Speer).

Hermann Giesler completed his architectural study at the Academy for Applied Arts in Munich. Starting from 1930 he worked as an independent architect. In 1933 he became master of building of districts in Sonthofen and 1937, became a professor.

Up to 1938 he designed the "Ordensburg" in Sonthofen, planned Gau Forums in Weimar and Augsburg, and the "university" for the NSDAP at Chiemsee. Also, Giesler refurbished different buildings (such as the "Hotel of the Elephant" in Weimar). In addition, he was commissioned to build Hitler's house in Munich.

In 1938 he was ordered by Hitler to the "General Building Inspector" for the reorganization of the city of Munich. Later he became also a director in the Organisation Todt, then one of the directors of the Group of Works of VI (Bavaria, Donaugaue).

Starting in 1941, after fellow architect Roderich Fick fell out of political favour, Giesler was entrusted by Hitler with the reorganization of the entire city of Linz. Beginning from 1942 he worked on plans and a large model for the Danube Development of the Banks. In August 1943, Giesler became a member of the Reichstag. Starting from 1944, he also worked on designs for the cultural center, which Hitler regarded with particular interest.

Giesler joined the Nazi Party in 1941 in Organisation Todt (OT) as head of the "Assembly for the Baltic States Giesler", as head of the Einsatzgruppe Russia North of the OT (1942–1944), and as Director of the OT-Einsatzgruppe VI (Bayern und Danube gaue). Concentration camp prisoners built weapons in the underground factories (1944-1945).

Throughout the war, Giesler and Speer had several heated arguments about architectural styles. In September 1944 Giesler was named one of the Reich's most important artists in the Gottbegnadeten list.

In 1945, Giesler was initially arrested by the U.S. military and interned as a Nazi, and charged in 1946. In 1947, he was indicted by a U.S. military court for war crimes in the concentration camp Mühldorf, a subcamp of Dachau. Giesler was sentenced to life imprisonment, but on 6 May 1948 his sentence, 25 years in prison, was reduced. On 7 July 1951 it was lowered to twelve years. Giesler was freed on 18 October 1952. He settled in Düsseldorf, where he worked in 1953 as an independent architect and author. Giesler published his autobiographical writings, which appeared both in right-wing publishers (see below), as a commitment to Nazism and Adolf Hitler. Giesler wrote Ein anderer Hitler (Another Hitler), a personal memoir about his relationship with the dictator. He died in 1987.