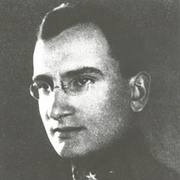 Herman Potočnik (pseudonym Hermann Noordung; 22 December 1892 – 27 August 1929) was a Slovene rocket engineer and pioneer of astronautics. He is chiefly remembered for his work addressing the long-term human habitation of space.

Potočnik was born in the port of Pula, Istria, then part of the Austria-Hungarian monarchy (now in Croatia). His family was of Slovene ethnicity and originated from Lower Styria in Austria-Hungary (now Slovenia).

Both of Potočnik's parents were Slovene. His father Jožef was born in 1841 in Zgornji Razbor near Slovenj Gradec and at the time of Herman's birth he served as a doctor and high navy officer in the Austro-Hungarian Navy harbour of Pula. His mother Minka was born February 7, 1854; she was a descendant of Czech immigrants, manufacturers of crucibles for glass-making, and a daughter of a well known wine merchant and local councillor Jožef Kokošinek from Maribor (born in Vitanje). In 1866, Herman's father Jožef participated in the second Battle of Vis, where the Austrian Navy under command of von Tegetthoff defeated the Royal Italian Navy. Jožef was later a general in the Austro-Hungarian Army.

When Herman's father died in 1894, his mother moved the family to Maribor. Herman had two brothers, Adolf and Gustav (who were both navy officers), and a sister Frančiška (Franci). He spent most of his childhood years in Maribor and, according to oral sources, in Vitanje.

The meaning of his German-like pseudonym Noordung is still a mystery, but some suggest that he used it to show the problems of chaos (German: Ordnung, "order"; ordunga in Slovene colloquial language). Assuming that the initial "N" may have been intended to stand as a negation, the name would mean "without order" or "no order".

In Maribor, Potočnik attended primary school. Afterward he went to the military secondary schools in Fischau and Hranice in Moravia. His uncle Heinrich was a major-general in the army, and probably enabled his study at Austrian military schools. From 1910 to 1913 he studied at the technical military academy in Mödling in Lower Austria (Niederösterreich) near Vienna and graduated as an engineers second lieutenant. His specialization was building of railways and bridges.

During the First World War he served in Galicia, Serbia and Bosnia and in 1915 he was promoted to the rank of First Lieutenant (Oberleutnant). He was assigned to the southwestern front of the Soča battlefield and there he experienced a breakthrough of the Austrian army to the river Piava and its retreat. In 1919 he was pensioned off from the Austrian military with the rank of captain because of tuberculosis that he contracted during the war. He started to study electrical engineering in the mechanical engineering department of the University of Technology in Vienna, Austria, and was awarded a doctorate in engineering. From 1925 onward, he devoted himself entirely to the problems of rocket science and space technology. Owing to chronic illness, he did not find a job or marry, but lived with his brother Adolf in Vienna, Austria.

The Problem of Space Travel

At the end of 1928, he published his sole book, Das Problem der Befahrung des Weltraums - der Raketen-Motor (The Problem of Space Travel - The Rocket Motor) in Berlin. The publisher, Richard Carl Schmidt, printed the year 1929 as a publishing date, probably from a purely business motive (to keep the book looking new throughout the coming year) and this date is often mistakenly given as the actual date of publication. In 188 pages and 100 handmade illustrations, Potočnik set out a plan for a breakthrough into space and the establishment of a permanent human presence there. He conceived a detailed design for a space station, regarded by Russian and American historians of spaceflight to be the first architecture in space. He described the use of orbiting spacecraft for detailed observation of the ground for peaceful and military purposes, and described how the special conditions of space could be useful for scientific experiments. Potočnik expressed strong doubts of the potentially destructive military use of these fresh discoveries.

The book was translated into Russian in early 1935, Slovene in 1986 (by the Slovenska matica), English in 1999 (by NASA) and Croatian in 2004 (by Marino Fonović, published by Labin Art Press). A partial translation to English, containing most of the essential chapters, was made as early as 1929 for the American magazine Science Wonder Stories and was issued in three parts (July, August and September 1929) and credited to "Captain Hermann Noordung, A.D., M.E., Berlin." The article was also published in Science Wonder Stories' sister publication Air Wonder Stories at the same time.

With his many ideas he became one of the founders of astronautics. His concepts were first taken seriously only by the amateur rocketry movement in Germany, the Verein für Raumschiffahrt (VfR - "Spaceflight Society"), centered on Hermann Oberth and his co-workers. In its Russian edition, the book may also have influenced Sergey Korolev's circle. More locally, Viennese engineers dismissed his work as fantasy.

Potočnik's book described geostationary satellites (first put forward by Konstantin Tsiolkovsky) and discussed communication between them and the ground using radio, but fell short of the idea of using satellites for mass broadcasting and as telecommunications relays (developed by Arthur C. Clarke in his Wireless World article of 1945). The wheel-shaped space station served as an inspiration for further development by Wernher von Braun (another former VfR member) in 1952. Von Braun saw orbiting space stations as a stepping stone to travel to other planets. In 1968, Stanley Kubrick's ground-breaking film, 2001: A Space Odyssey, depicted such a role for "Space Station V".

Potočnik died of pneumonia at the age of 36 in great poverty in Vienna, Austria, and was buried there. An obituary notice about his death was printed in one Maribor daily newspaper, mentioning his ranks (engineers and captain), his illness, but nothing about his work regarding space.