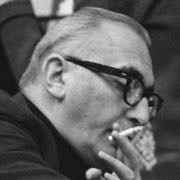 He was awarded the International Master (IM) title in 1950 and the Grandmaster (GM) title in 1952. He took 10th at the Candidates Tournament at Amsterdam 1956. He traveled a lot and finally settled in Venezuela, where he taught chess at the Caracas Military Academy. He died in Caracas in 1981.