Henry James Clark was an American naturalist. He was born in Easton, Massachusetts, July 22, 1826; graduated at New York University 1848; became a pupil of Asa Gray at the Cambridge botanical garden; graduated at the Lawrence Scientific School at Harvard 1854; assistant to Louis Agassiz till 1863, and also for three years adjunct Professor of Zoology at the Lawrence Scientific School; Professor of Natural Sciences in Pennsylvania State College, near Bellefonte, 1866–69; Professor of Natural History in University of Kentucky, Lexington, 1869–72; Professor of Veterinary Science in Massachusetts Agricultural College, Amherst, from 1872 until his death there July 1, 1873. He contributed to the Smithsonian publications, to the Proceedings of the American Academy of Arts and Sciences, and to other learned periodicals. Author of Mind in Nature (Cambridge, 1863) and of the Mode of Development of Animals (New York, 1865). See A. S. Packard, Jr.'s Memoir in Biographical Memoirs of the National Academy of Sciences (Washington, 1877).

The contents of this page are sourced from Wikipedia article on 29 Apr 2020. The contents are available under the CC BY-SA 4.0 license.
comments so far.
Comments
From our partners
Sponsored
Reference sources
References
https://books.google.com/books?id=YXv1wBr20UEC&pg=PA317
http://www.nasonline.org/publications/biographical-memoirs/memoir-pdfs/clark-henry-j.pdf
Trending today in 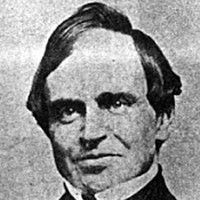 Officer in Charge, Naval Activities, during Battle of Wake Island